It is the height of hypocrisy on the part of Ugandan President Museveni to attempt to ridicule Nigeria over the ongoing war on terror. President Yoweni Museveni attended the grand finale rally for the National Resistance Movement (NRM) woman flagbearer, Mrs Rebecca Nalwanga at Kalanga in Uganda last week. In condemning the opposition in Uganda the President said that “some people have turned politics to a game of lies and unseriousness”. In his characteristic manner, President Museveni took advantage of the local campaign to launch an unwarranted attack on Nigeria. In criticizing the maladroit handling of the war on terror by the Goodlock Jonathan Administration President Museveni boasted thus,” I have never invited the United Nations to guard our security. Me, Yoweni Museveni to say that I have failed to protect my people and I call in the UN … I would rather hang myself. We prioritized national security by developing a strong army, otherwise our Uganda would be like DRC, South Sudan, Somalia or Nigeria where militias have disappeared with school children. It will be a vote of no confidence in our country and our citizens if we can’t guarantee our security. What kind of persons would we be?” It is interesting to note that the people of the Nubian community in Uganda saw through the “lies and unseriousness” of the ruling party in Uganda. Hence, they rejected the candidate of NRM at the polls by voting for the 28 -year old Ms Brenda Nabukenya of the Democratic Party. I have just been informed by a Ugandan human rights colleague that President Museveni is pained by the fact that the electorate in the Luweto Constituency voted for a political rookie who was born the very year he seized power and assumed the presidency of the Republic of Uganda. Like other world Leaders President Museveni is perfectly entitled to berate the Goodluck Jonathan Administration for its failure to contain the boko haram sect. But it is the height of hypocrisy on the part of the Ugandan leader to attempt to ridicule Nigeria in the ongoing war on terror. The Ugandan leader should not be allowed to get away with misleading claims as he lacks the moral competence to teach any lesson on how to end the atrocities committed by terrorists in any part of Africa. Moreso that Uganda with a “prioritized national security” has not been able to defeat the rag tag Lord’s Resistance Army led by Joseph Kony for over two decades. Even though President Museveni would not invite the United Nations to provide security for his country, he has never hesitated to call on the United States and other Western countries to provide troops, arms and ammunition as well as funds in containing the menace of the LRA. Just on March 24 this year, the United States government was reported to have deployed “military aircraft as well as an increased number of troops to Uganda to assist in the hunt for Joseph Kony, the fugitive Ugandan leader of the Lord’s Resistance Army (LRA).” Of course, that was not the first time that foreign troops had been dispatched to Uganda following the inability of President Museveni and his “strong army” to guarantee life and property in Uganda. Or is President Museveni not aware that Joseph Kony has gone underground because he and his army commanders were declared wanted by the International Criminal Court (ICC), an organ of the United Nations? Yet President Museveni would never call in the United Nations to take part in the maintenance of internal security in Uganda! The garrulous Ugandan leader also boasted that he would not allow his country to descend to the level of insecurity that obtains in Nigeria where school children have disappeared. Has President Museveni quickly forgotten that the LRA invaded St. Mary Secondary Grammar School on October 1996 where they abducted 150 girls. It is on record that it was not the strong army of Uganda but the vice-principal of the school, Reverend Sister Rachele Fasera, who rescued 109 of the abducted girls. Several years later, the President wrote a letter to Mr. Kofi Anan, the then Secretary-General of the United Nations, to intervene in respect of the abductees who were still in the captivity of the terrorists. With respect, President Museveni’s uncomplimentary remarks on DRC and South Sudan are equally uncalled for having regard to the involvement of the Ugandan army in the destabilisation of the Lake region. In Communication No 227/99 (2003) filed at the African Commission on Human and Peoples Rights by the Democratic Republic of Congo it was established that the national armies of Uganda along with Burundi and Rwanda were indicted for the massive infringement of human rights in the DRC. Specifically, the Commission found that “the killings, massacres, rapes, mutilations and other grave human rights abuses were committed” while the Respondents States’ were still in effective occupation of the eastern provinces of the complainant state contrary to their obligations under Part III of the Geneva Convention. With respect to the reckless looting of the resources of the complainant State, the Commission confirmed the allegation that “Rwanda and Uganda took over control of fiscal and customs revenue collected respectively by the Director General of Taxes.” Since President Museveni could no longer rely on the illegal exploitation of the vast resources of the DRC, his government has had to depend on foreign aid to fund the annual budget of Uganda. According to the Overseas Development Institute, Uganda received $1.6 billion in 2011, making it the 20thworld’s largest aid recipient. Comrade Tajudeen Abdulraman, the respected pan Africanist of Nigerian extraction, who worked closely with President Museveni in Kampala until he died in a car crash in 2009, must have turned in his grave over the unprecedented reliance of Uganda on foreign aid to fund its annual budget today. 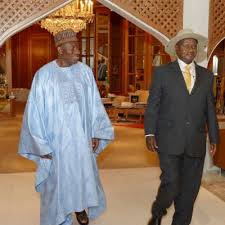 It is indisputable that the record of atrocities of LRA is by far worse than that of the Boko Haram sect. It is common knowledge that the abduction of children and women is the hallmark of the LRA. From the account of the Human Rights Watch between 1987 and 2006 “at least 20, 000 Ugandan children were abducted. More than 1.9 million people were displaced from their homes into camps and tens of thousands of Ugandan civilians died. Nearly the entire population of Acholiland was displaced due to a combination of LRA actions and the Ugandan government’s forcible resettlement of people in camps. Living conditions in the camps were horrific, and for years communities were largely cut off from basic necessities. The death toll from cholera and other diseases was often higher than from the conflict itself.” Last week, the Chairman of the Editorial Board of Thisday newspaper, Mr. Segun Adeniyi noted that “it is over six years since LRA wreaked any havoc in Northern Uganda… “. While that is an irrefutable statement, it ought to be pointed out that the LRA has only been pushed into DRC and South Sudan where it has linked up with other criminal gangs to continue its atrocious attacks on the people of both countries. In the renewed fight on terror in Nigeria the armed forces should wipe out terrorism and not behave like Uganda by driving them to neighboring countries. That will not guarantee regional peace which is badly needed for the development of a continent that has been raped by imperialism and its local lackeys who parade themselves as African leaders. *Source All Africa.com]]>