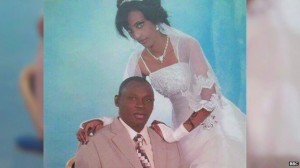 Meriam Yehya Ibrahim Ishag said that as she was brought up a Christian, she had not committed apostasy[/caption]

A Sudanese woman awaiting the death penalty for abandoning her religious faith has given birth in jail near the capital, Khartoum, her lawyer has said.

Meriam Yehya Ibrahim Ishag married a Christian man and was sentenced to hang for apostasy earlier this month after refusing to renounce Christianity. She is allowed to nurse her baby girl for two years before the sentence is carried out. Born to a Muslim father, she was convicted by a Sharia court. Sudan has a majority Muslim population, which is governed by Islamic law. Hundred lashes Ms Ibrahim was also convicted of adultery on the grounds that her marriage to a Christian man from South Sudan was void under Sudan’s version of Islamic law, which says Muslim women cannot marry non-Muslims. For this the judge sentenced her to 100 lashes, which will reportedly be carried out when she has recovered from giving birth. Ms Ibrahim was raised as an Orthodox Christian, her mother’s religion, because her father, a Muslim, was reportedly absent during her childhood. [caption id="attachment_9524" align="alignright" width="300"] 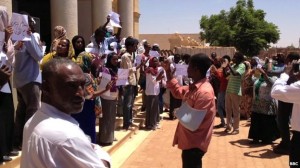 When she was sentenced, a crowd of protesters gathered outside the court to stand up for religious freedom[/caption] According to Amnesty International, she was arrested and charged with adultery in August 2013, and the court added the charge of apostasy in February 2014 when she said she was a Christian and not a Muslim. Lawyer Elshareef Ali said his 27-year-old client had given birth to a baby girl in the early hours of Tuesday morning in a hospital wing at the prison. She also has her 20-month-old son with her as he has been held with her in prison since late February, he said. Correspondents say death sentences are rarely carried out in Sudan. Ms Ibrahim’s legal team lodged an appeal on 22 May as Mr Ali says the verdict contravenes the constitution’s enshrining of freedom of faith, the Bloomberg news agency reports. Western embassies and rights groups have urged Sudan to respect the right of the woman to choose her religion. * Source BBC]]>