Ambassador Ebrhim Rasool delivering remarks.Photo by Ben Bangoura[/caption] On Thursday, May 14th, 2014, His Excellency Ebrahim Rasool, Ambassador of the Republic of South Africa,  and his wife Rosieda Shabodien, hosted their national day with a large inaugural celebration at the newly renovated South African Embassy in Washington, DC.   The festivities, which integrated the country’s history and achievements together, marked the twenty year anniversary of the first non-racial democratic election in the country. The evening was a glorious tribute to Nelson Mandela, whose successful struggle against South Africa’s apartheid system of racial segregation and discrimination made him a global symbol for the cause of human rights and earned him the Nobel Prize. Guests, including luminaries from government, business, academia, media and the African Diaspora, were then led into a reception and entertained by South African band Mahala, which concluded the memorable evening.  Ambassador Rasool opened the evening by graciously welcoming guests to the “exorcised building” and discussing how the embassy has transformed from one of promoting racism and oppression to a symbol of a free and democratic South Africa. While maintaining the classic architecture of the building, the transformation is representative of the “modern Africa state” that is evolving. The building is a testament to vast changes that have occurred over the past 20 years in South Africa. Rasool indicated that President Zuma had decreed that the country’s celebrations of freedom be dedicated to Nelson Mandela, the first black President and the first elected in a fully representative democratic election.  He mentioned that many in South Africa were also heroes in the quest to end apartheid. However, it was Mandela who sparked the attention of the world.  A statute of Mandela stands outside the Embassy and is placed where Dr. Mary Frances Berry and others from TransAfrica and the Free South Africa Movement staged protests inspiring many other Americans to boycott apartheid South Africa ultimately leading to Mandela’s freedom and the end to the atrocious practice. In celebrating 20 years as a free, nonracial, democratic and united country, Ambassador Rasool was particularly proud of the fifth national elections that recently concluded citing over 80% of the eligible voters were registered and 73% cast votes. Rasool went on to discuss some of the achievements that have occurred over the past 20 years, including that today approximately 90% of South Africans have access to safe drinking water, electricity, and sanitation, which was available to only half the population in 1994.   [caption id="attachment_9411" align="alignright" width="300"] 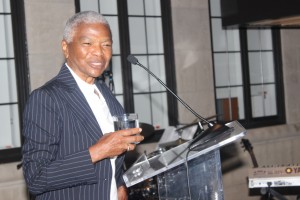 Dr. Mary Frances Berry, from South Africa proposing the toast.Photo by Ben Bangoura[/caption] Other achievements that have improved the standard of living for South Africans include housing, universal primary education, and social grants for millions who would have been left to die under apartheid. Ambassador Rasool was particularly thankful for the strides South Africa has made in HIV/AIDS prevention and treatment. With thousands of lives saved and millions tested, as well as access to services and treatment for millions, the Ambassador asked Secretary Higginbottom to convey South Africa’s gratitude to the U.S. government and people for their assistance. However, he added that “there is still much work to do in this transformational society.” While South Africa’s GDP has grown by 83% over the last 20 years, remnants of old laws and culture are impacting key areas of progress. Access to agricultural means, women’s rights, and unemployment are key areas that must be addressed moving forward. Many South African nationals attending the event agreed with Ambassador Rasool about the progress taken place in post apartheid South Africa. Guest of Honor, Heather Higginbottom, U.S. Deputy Secretary of State for Management & Resources,  highlighted signature elements of the bi-lateral relationship between the United States and South Africa. She indicated that dialogue and cooperation continues in the key areas of health, trade & investment, law enforcement, climate change, energy, and nuclear nonproliferation. Higginbottom stated she was especially proud of the United States’ partnership with South Africa through the President’s Emergency Plan for AIDS Relief (PEPFAR). The U.S. has invested $4.2B in the South African response to HIV/AIDS, placing it on target to become the first country in Africa to fully manage its PEPFAR program by 2017. She also highlighted President Obama’s Young African Leaders Initiative, as well as the upcoming first U.S.- Africa Leaders Summit, when President Obama will welcome leaders from across the continent to Washington, DC on August 5 – 6, 2014. Nono Buthelezi is a nurse Practioner living northeast DC who moved to the United States from Botswana in 1992. Last year, she visited South Africa for the first time in nearly thirty years.  She said she was pleased to see people living together as one.  “In our country today we can buy anything we want from any store we want. Everything looks different than before,” said the 55 year-old Nono. For Vuyo Dunjwa, a trade specialist who works for the Sub-Saharan Chamber of Commerce in Philadelphia, the expectations of South Africans are being met in many ways. “Market capitalization has increased 8 times in 20 years, electricity, water, sanitations, infrastructures as well as many social services that were not available to millions of us before’, Vuyo said.  But he acknowledged that it would still be many years before all South Africans can enjoy the tremendous resources the country harbor. Speaking about the relationship between the US and the continent, the South African top diplomat  said he is looking forward to the first US-Africa Leaders Summit, hosted by the White House and feels it is long overdue.   [caption id="attachment_9413" align="alignleft" width="300"] 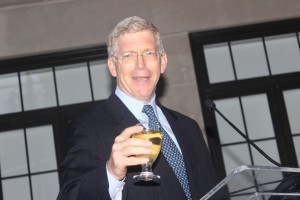 U.S. Deputy Secretary of Energy Daniel B. Poneman.Photo by Ben Bangoura[/caption] He sees it as an opportunity to “pursue a further partnership to deepen trade with AGOA as its foundation.” He indicated that African Heads of State are coming to discuss investment opportunities, the next generation of young Africans as a human resource, and ways to resolve threats of security on the continent, including extremist groups like Boko Haram. Ambassador Rasool thanked his African Ambassador colleagues, many of whom were in attendance, and indicated that many African countries paid a high price for supporting South Africa’s fight to end apartheid. He also thanked Team South Africa . Guests were then led in a toast to Dr. Mary Frances Berry by U.S. Deputy Secretary of Energy, Daniel B. Poneman  Guests, including luminaries from government, business, academia, media and the African Diaspora, were then led into a reception and entertained by South African band Mahala, which concluded the memorable evening.  ]]>