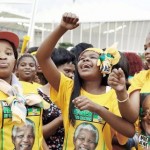 “We dedicate our victory to Madiba’s memory, and pledge to continue taking forward his legacy and that of his peers and forebears,” Zuma said, using Mandela’s clan name

The party’s 62.15 percent share of the vote meant an “overwhelming mandate” for a fifth term in government since the end of white-minority rule, said Zuma, speaking publicly for the first time on the vote results.

Nostalgia for the father of the nation, who died last December, helped support for the ruling party in Wednesday’s polls despite a series of corruption scandals, galloping unemployment and economic doldrums.

Marking two decades to the day Mandela became South Africa’s first black president, Zuma said: “The victory also reaffirms that the ANC remains the only true hope for the majority of our people, particularly the poor and the working class.”

The results assured the ruling party 249 seats in the 400-member parliament, while main opposition the centrist Democratic Alliance’s (DA) 22.23 percent gave it 89.

Over 73 percent of the 25.4 million registered voters cast their ballot.

A few thousand ANC supporters gathered in a square next to the party headquarters in Johannesburg on Saturday night for a victory party. Zuma danced on stage with party leaders while local artists performed amid flags and branding sporting the ANC’s green, black and gold.

Speaking at the main election tallying centre in Pretoria before dashing to the victory rally, Zuma set the tone for the incoming administration.

He pledged to continue programmes to improve the delivery of basic services to millions of South Africans and roll out massive new infrastructure projects.

Zuma, 72, is assured of a second five-year term despite $23 million in state-paid upgrades to his private home and personal friends flying wedding guests into the country via a military air force base.

But the ANC’s support fell slightly from the 65.9 percent it won in 2009 elections, as opposed to the DA’s improvement on its previous tally of 16.66 percent.

The DA also strengthened its position in the Western Cape province, the only governed by an opposition party.

The ANC’s share of the vote also plunged in economic heartland, Gauteng province, from 64 percent to 54 percent, where personal scandals surrounding the president have been a liability for the party.

Results trickled in last for Gauteng, which also has the highest number of voters, raising allegations of vote-rigging from the EFF and historical ANC rival the Inkatha Freedom Party (IFP).

Thousands died in clashes between ANC and IFP supporters in the early 1990s during negotiations to end white-minority rule and Alexandra was one of the hotspots.

In rivalry reminiscent of the dying days of apartheid, the IFP said ballot papers had been transported in a car with ANC-branding.

“There were irregularities during the voting process,” senior IFP Muzi Ntuli told AFP.

Provincial ANC spokesman Nkenke Kekana meanwhile accused the IFP of being sore losers after conceding two key districts to the ruling party. “For the first time since 1994 the ANC managed to win those voting districts from the IFP. That is the source of the violence,” he told AFP.

Riots flared up again briefly on Saturday night and police fired teargas to disperse a small group, according to police spokesman Neville Malila.

Malema called on people in Alexandra to “accept defeat” for the sake of peace, despite the ANC using “mafia tactics to win Gauteng.”