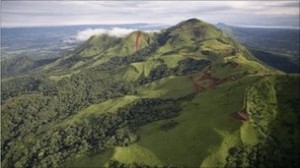 The Simandou project, which has been delayed for years, would be the biggest iron ore and infrastructure project developed in Africa, the firms said. The $20bn (£12bn) “investment framework” provides legal and financial backing for the project. The framework will now go the Guinean National Assembly for ratification. If ratified, the three parties said they would complete a feasibility study, including timeline and costs, within about a year. President of the Republic of Guinea Alpha Conde said: “With massive infrastructure investment, this project is of critical importance for the people of Guinea. “It’s a nationwide priority that goes beyond the mines and far beyond our generations. With transparent and fair deals, our mining sector has the potential to be a game changer for Guinea.” ‘World class’ As well as mining the iron ore, the three partners said they were working together to raise the funds to build a 650km railway and a deep-water port to transport the rocks and minerals. They said the project had the potential to double Guinea’s GDP and create 45,000 jobs. “Today is an important milestone in the development of this world-class iron ore resource for the benefit of all shareholders and the people of Guinea,” said Sam Walsh, chief executive of Rio Tinto. Rio Tinto will take a 46.6% stake in the project, Chinalco 41.3%, Guinea 7.5% and IFC 4.6%. Rio was first awarded concessions to Simandou almost 10 years ago, but was forced to give up those in the northern part of the range of hills in 2008. These were then given to BSG Resources, a company controlled by Israeli billionaire Beny Steinmetz. Last month, the BSGR permits were rescinded by the Guinean government, paving the way for the deal between Rio and Chinalco. * Source BBC]]>