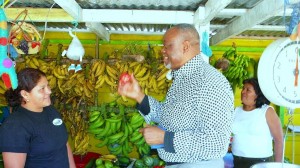 Afantchao on his turf selling the merits of African food[/caption] African food may not be on the menu when leaders from the continent honor an invitation from President for a US-African summit in August 2014, but it has contributed a great deal in promoting the African identity. In the Washington DC Metro area, the African food scene has evolved from serving just Africans to building a client base that is dominated by Americans. At leading Ethiopian restaurants like Meskerem and Dukem in Washington DC, 90 percent of the clients are Americans. At West African restaurants like Bukom Café and Come to Africa restaurant in Takoma Park, MD, a sizeable portion of the customers are Americans. The curiosity is that these restaurants served purely African food and the Americans who come there are treated to purely ethnic African cuisine. African food may not yet be at the level to rival more established brands like Chinese or Mexican food but it is a brand on the move. Yao Afantchao, from Togo has played a subtle but influential role in the promotion of African food. For 35 years,  Afantchao has engaged in innovative agricultural transfer of knowledge to small farmers in USA and in the Africa. Afantchao can be described as a creative, motivated, enthusiastic and dynamic professional with extensive experience in administration, and applied research. He has the vision to identify new ideas and develop them from conception to completion. He is an expert in ethnic and specialty foods including African and Caribbean vegetables and seafood processing. In this capacity, Mr. Afantchao consults with several institutions including universities, government agencies and private organizations. His work has been recognized in the Mid-Atlantic Region. (Mid-Atlantic Food & Farm Coalition) Yao has also been involved in rural development, sustainable rural micro enterprise and related activities. These activities had been sponsored by such organizations as, USAID, USDA, OICI*, NIFI*, UMES*, UMCP*, MIPS* contributing to poverty alleviation efforts in designated African countries. His educational background originates from Togo, West Africa, and continues in the USA with Small Farm Planning and Agricultural Marketing. (Prairie View University, Texas) Currently, Afantchao works as the Ethnic and Specialty Crops Development Program Specialist, at the College of Agriculture, Urban Sustainability and Environmental Sciences–(CAUSES), at the University of the District of Columbia. He is also the current State Coordinator for the North East Sustainable Agriculture, Research and Education (NESARE) a Division of the National Institute of Food and Agriculture (NIFA), for Washington, DC. Interviewed by Pan African Visions, Yao Afantchao shares his efforts and contributions towards the promotion of the African food label in the USA. Yao Afantchao, you are have been associated with African food in the USA for a long time, how did this become an area of focus for you and what are some of the things you have done to promote African food?  I have been involved in the ethnic specialty food movement for over thirty years, as it started as far back as I attempted to create a food system to satisfy the quest for the “home food” , by the immigrant population of the Mid- Atlantic Region of the USA. By my own initiative, I began to investigate the possibility of growing some identified food plants coveted by African and Caribbean populations. My trials were encouraging and so I continued the applied research by enlarging the production space, and the demand kept growing for the crops, as the news spread quickly through word of mouth. About the project to market smoked fish, can you tell us more about it, its successes, challenges and why it was stopped? African style smoke dried fish was my primary focus in approach to the establishment of the new food system. Production facility and equipment were my most challenging situations. Through determination I reached out to several stake holders in different communities, rural and urban. I finally succeeded in building a smoke house capable of producing five hundred pounds of finished product, per week. I must state here that it was not an efficient facility, but it was what I called then “the Hilton of Smoke houses” when compared to smoking facilities I knew new in Africa. [caption id="attachment_9405" align="alignright" width="225"] 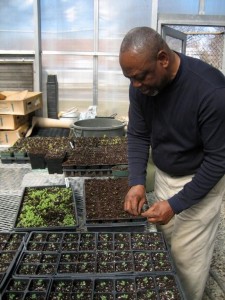 At work in one of the nurseries[/caption] Logically I started exploring ways to improve my equipment, both for volume and efficiency. At this time, I approached the University of Maryland, Eastern Shore for technical guidance.  Both UMES and UMCP became very interested in my project, thus, the adoption of the project as a program for research and education. I had applied for a grant for developing and constructing a modern that can produce the fish in less time and using less energy. I was awarded a grant by the Maryland Industrial Partnerships (MIPS). The result has been the building of a mobile smoke house capable of taking two thousand pounds of raw product, at a time. I then became a research associate at the University for several years, thus, my focus has changed to this fascinating work that I am now embarked on. “Searching for Goodness and value in African Foods”. You are now part of a project in UDC to grow ethnic African food, may we know more about the project? About five years ago, I was approached by the Cooperative Extension Service, of the University of the District of Columbia (UDC) to initiate an ethnic and specialty crops program, at their Agricultural Experimentation Station. The purpose of this program has been to make ethnic and specialty foods available, accessible and affordable. We initiated the program with a research project, which would be the continuation of what was done at the University of Maryland. What kind of ethnic food do you grow and how adaptable is the American climate to growing ethnic African food? Through the years of experimenting with various plants, we have identified nine popular crops in the African and Caribbean communities. They are: 1) Avuvo (sp. Celosia argentea) aka soko yokoto in Nigeria. 2) Garden egg (sp. solanum aethiopicum). 3) Gboma (sp. Solanum macrocarpon). 4) Kitely (sp. solanum gilo). 5) Sawa sawa (sp. Hibiscus sabdariffa) aka sorrel, bissap or roselle. 6) Hot Peppers (sp. Capsicum chinense) or Scotch bonnet, denya in Togo. 7) Jamma jamma (sp. Solanum scabrum) or huckleberry in Cameroon. 8)Jute Leaf (sp. Corchorus olitorius) aka, palaver sauce in Liberia, ademe in Togo or ewedu in Nigeria. 9) Water leaf (sp. Talnum triangular) aka, Surinam purslane or Lagos Bologi. Please refer to our ethnic crops brochure for more information. We are glad to announce that we have had excellent results in climate adaptability as well as plant yield. How much interest have all these initiatives of yours generated within Africans and Americans? I am happy to say that through educational outreach in to both communities, we have created quite an interest in that Africans are able to access their home foods. This is due to the fact that we have also trained a number of American small farmers in southern Maryland, who today, are benefiting from the exposure and education by the ethnic crops program. I would also mention here that a great deal of effort has been put forth for community education, as we reach target audiences through marketing documents, demonstration, workshops and food tasting events. To date we have directly and indirectly reached around 155.000 people in the region. What potential do you see in growing ethnic food, the economic potential and long term viability as an economic activity, do you see a future in it?  The ethnic food story is spreading at a very fast pace across the Nation and especially, the East Coast of the US. Several Universities are engaged in the promotion of these foods that are essential part of the lives of the eaters.(UMD, Rutgers, Cornell, UMASS and UFL, to name a few). The potential for the supply chain that includes producers and distributors is enormous in that this new food system already has a vibrant marketplace and multiplying. This also means that an opportunity for entrepreneurship is created. May we know some of the biggest challenges that you have faced?  In spite of the success we have enjoyed, we also have a few shortcomings: A) the consumers wish to have the vegetables in the fresh state, preferably. However, we can only provide the crops during the rather short growing season. B) We have not yet had a surplus harvest to even think of preservation. C) Labor is one major challenge in all Agricultural enterprises and we have our share of this problem. There is quite a strong African population of Africans in the Washington DC metro area, what is your take on the food services that serve their needs?   [caption id="attachment_9406" align="alignleft" width="300"] 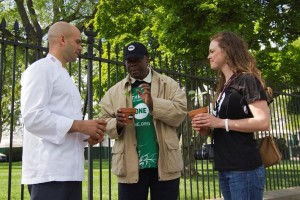 Afantchao in the middle with celebrated White House Chef Sam Kass[/caption] My observation in this regard is that the purveyors of ethnic foods are quite successful in their businesses, because there is not much in complains from the customers who consider themselves lucky to even access what is available on the market. We could question quality and price, but it would do no good until there is an educated consumer group and competition that offers better food at an affordable price. Sometimes food also is a means of establishing a cultural identity, what will it take for African to stand out as a brand that can compete with Chinese or Mexican cuisine for instance? In my opinion, it will be a matter of education for improvement and an innovative spirit to arrive at the threshold of competition. When the restaurant owners are not following the nutrition trends, health implications/benefits from food, they will continue to remain traditional in approach to their offerings. While we cannot really say that Chinese food as we know it on the market may be the best in nutritional values, presentation is quite another thing. The African patrons have to become vocal about their preferences, so we can improve our lot together. Each one Teach one! Have your efforts received any form of supports from the American authorities or the African Embassies?  Well, I have received some awards in the region, as well as coverage in the media (The Washington post, The Voice of America, the National Public Radio and a host of blogs.) The USDA currently supports my work by positively responding to my educational program. *Yao Afantchao can be reached at yafantchao@udc.edu;    ]]>