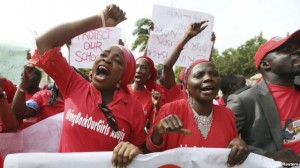 Nigerians take part in a protest demanding for the release of secondary school girls abducted from the remote village of Chibok, in Asokoro district in Abuja, Nigeria, May 13, 2014.[/caption] Muslims worldwide have condemned the abduction a month ago of more than 200 Nigerian schoolgirls by the Muslim extremist group Boko Haram. Muslim leaders have criticized Boko Haram’s leader, Abubakar Shekau, for using Islamic teachings as his justification for threatening to sell the girls into slavery. Others have focused on what they view as a slow response by Nigeria’s government to the crisis. Muslim leader Faisal Suliman, chair of the South Africa Muslim Network (SAMNET), appeared on the South African radio show Voice of the Cape’s Breakfast Beaton Wednesday to distance Boko Haram’s actions from Islam. “This is a totally un-Islamic act. It is contrary to the Sharia and what is in the Koran. There is no place for this in Islam no matter who does it, regardless of whatever cause they try and perceive it to be,” Suliman said. He questioned some of the coverage by mainstream media, whom he claimed were trying to link the kidnappings to the beliefs of Islam. He also questioned the use of words such as “Islamist” and “fundamentalist” to describe the group’s actions. “It was an act worthy of condemnation across all communities, religions and ethnicities, and we are trying to make that clear. But certainly in the mainstream media, it is still being presented with that Islamic connotation,” he said. Earlier this week, Boko Haram released a video that allegedly shows some of the kidnapped girls dressed in Islamic attire and reciting verses from the Koran. Suliman said the video seemed contrived and designed to touch every sensitivity of a non-Muslim in order to stir up hatred toward Muslims. In Indonesia, the world’s most populous Muslim-majority country, the Jakarta Post published an editorial earlier this month condemning the Boko Haram leader for “wrongly” citing Islamic teaching as his excuse for selling the abducted girls into slavery. Recalling the Taliban’s shooting of 15-year-old Pakistani girl Malala Yousafzai in 2012 because of her outspokenness in defense of girls’ right to an education, the editorial said: “Malala’s message needs to be conveyed to all people who use their power to block children’s access to education. It is saddening that religion is misused to terrorize people and to kill the future leaders of the world.” Nigerian president criticized The newspaper also criticized Nigerian President Goodluck Jonathan, noting that “only after international condemnation and street demonstrations poured in did President Jonathan tell his nation that he would take all necessary actions to return the young women to their parents and schools, while also acknowledging that the whereabouts of the abductees remained unknown.” In an editorial, The New York Times also faulted the Nigerian president: “It wasn’t until Sunday, more than two weeks after the kidnappings, that he called a meeting of government officials, including the leader of the girls’ school, to discuss the incident. On May 7, Al-Azhar University in Cairo, one of Sunni Islam’s most prestigious institutions, urged Boko Haram to release the kidnapped schoolgirls. Sheik Ahmed el-Tayeb of Al-Azhar said the abductions “completely contradict Islam and its tolerant principles.” Egyptian Religious Endowments Minister Mohammed Mohktar Gomaa also said, “The actions taken by Boko Haram are pure terrorism, with no relation to Islam, especially the kidnapping of the girls.” Dawn, an English language newspaper in Pakistan, published an opinion piece that takes Nigeria to task for not moving against Boko Haram. “The popular upsurge in Nigeria in the wake of the latest unspeakable atrocity provides some scope for hoping that the state will finally act decisively to obliterate the growing menace,” wrote columnist Mahir Ali. In Sweden, in an editorial posted on the left-wing news website politism.se, blogger Nikita Feiz criticized the international community for its slow response and asked why the situation hadn’t triggered as loud a reaction as when Malala was shot in Pakistan. “Looking at the situation in Nigeria, Malala appears like a false promise from the West that it would stand up for girls’ rights to attend school without fear of being subjected to sexual exploitation and abuse,” Feiz said. “It is difficult not to draw the conclusion that the West’s assurance to act for girls’ rights suddenly isn’t as natural when it comes to girls’ rights in a country in Africa,” Feiz said. *Source VOA]]>