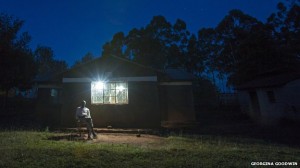 The only way he could generate power was by using a kerosene-powered generator. This was dirty, smelly and dangerous.

But now things are different. Mr Kibet, a farmer with 15 acres of commercial land on the outskirts of Kitale, has switched to solar-generated electricity which he pays for using his mobile phone. “I saw it can save you a lot of money,” he told the BBC. “It’s improved my life, for now I don’t use kerosene anymore – I have my own light. And it’s bright.” This combination of solar technology and mobile micro-payments is being rolled out across Kenya by a company called M-Kopa Solar. More than 70,000 households have signed up so far, with 1,000 more joining every week, the company says. And take-up is spreading into neighbouring Uganda. M-Kopa hopes to be in a million homes by 2018. ‘Unhealthy’ “Kerosene is a terrible thing to have to burn in your home – expensive, dirty, unhealthy and ultimately not very bright,” explains M-Kopa co-founder Jesse Moore. “I’ve never met a customer who likes kerosene, which makes for a great starting point for building our business.” A typical domestic set-up includes a 4W or 5W solar photovoltaic panel, lights, a mobile phone charging point, and an optional rechargeable radio. Now Mr Kibet only uses kerosene for lighting cooking fires. “M-Kopa is cheaper,” he says. Households buy the system through the M-Pesa mobile payment platform set up by mobile operators Vodafone and Safaricom. After putting down a deposit of 2,999 Kenyan shillings (Ksh) – about £20 – householders then pay 50Ksh a day for a year until they own the kit outright. This compares with the 17,000Ksh a year off-grid households spend on kerosene, says Safaricom boss Bob Collymore. Mobile payments The solar panels contain embedded SIM cards that can communicate with M-Kopa’s control centre. “Each and every customer’s solar energy system is connected to M-Kopanet allowing us to monitor its performance, troubleshoot issues, as well as control its operational state,” says co-founder Nick Hughes, who also led the Vodafone team behind M-Pesa. “We can disable systems remotely if payments are missed, or reactivate them when customers catch up,” he adds. But the default rate on payments is just 5%, the company says. Through the M-Pesa system – “pesa” means money in Swahili – people can pay bills simply by sending a text message to the recipient stating the amount that needs to be paid. The recipient can then redeem the money at an M-Pesa agent. “M-Pesa is a stand-out example of how technology can solve problems – in this case how to move cash over distances quickly, securely and in an affordable way,” Mr Hughes told the BBC. “Today, M-Pesa is seven years old, and does hundreds of transactions a second. It has changed the way money moves in Kenya.” About 25% of Kenya’s gross domestic product is thought to flow through the platform. Leap-frogging Mr Kibet is one of a growing number of people in developing economies who have leap-frogged traditional computing technologies and gone straight to mobile for accessing the internet. According to mobile industry body GSMA, the number of mobile phone subscribers in sub-Saharan Africa – currently more than 250 million – is forecast to rise to nearly 350 million by 2017. Access to fixed-line phones at home is less than 5% in the region, but almost all households have access to a basic mobile. And now smartphones are growing fast in popularity, too. They accounted for 67% of mobile sales in Kenya between 2013 and 2014, says Safaricom, and more than 100,000 are being bought each month. This mobile revolution is presenting a blank canvas for new technologies, says Mr Hughes. “Perhaps the biggest difference in Africa that I find hugely exciting is the opportunity to build innovative services without tackling the inertia of legacy systems,” he says. Wireless water Mobile is also helping provide better, more sustainable water supplies for Africa. For example, Mobile Water for Development, a project based at the University of Oxford, undertakes a number of studies to try to improve rural access to water through mobile technology. Projects have included a one-year study into “smart handpumps” – water pumps that can transmit their operational status via embedded mobile technology. According to some estimates, a third of handpumps in Africa don’t work at any one time. Data collected from these smart pumps reveal usage patterns that then alert water companies when it looks like a pump isn’t working. They can then send out engineers quickly to fix the pumps before villagers are forced to resort to dirtier sources of water. In another example, a water company in Dar es Salaam, Tanzania, teamed up with telecoms firms Vodacom and Zain – later Airtel Money – in 2009 to introduce mobile payment services for water. [caption id="attachment_9528" align="alignright" width="300"] 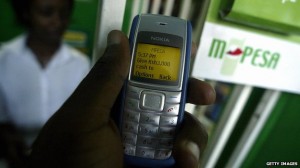 About a quarter of Kenya’s gross domestic product flows through the M-Pesa mobile payment system[/caption] Since then, mobile payment services have blossomed in sub-Saharan Africa, with water companies using payments services including M-Pesa, Airtel Money, and MTN Mobile Money. Ineffective billing and payment collection has been costing the African water industry $500m (£300m) a year, according to the World Bank. But studies have shown that making payments easier helps reduce corruption and improve revenue and data collection per customer, thereby enabling water companies to invest more in their services and operate them more efficiently. This is crucial in a continent where reliable supplies of clean drinking water are often hard to come by. Mobile is helping to spread sustainable technologies throughout Africa, and changing lives for the better. * Source BBC]]>