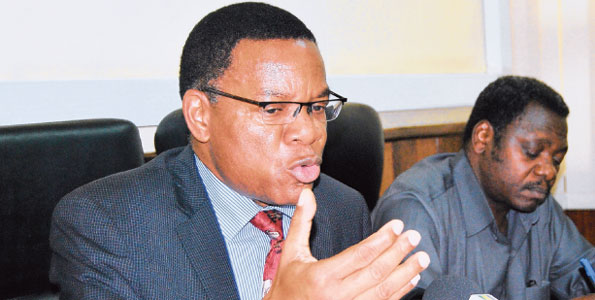 Membe: 'Prove I was wrong about Rwanda stoking war in DRC, and I'll resign' 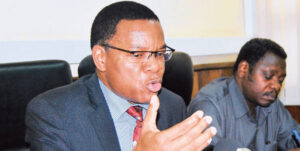 When I told the BBC that Rwandans were causing instability in Eastern Congo, I meant what I said” – Bernard Membe, Minister of Foreign Affairs and International Cooperation. PHOTO | FILE[/caption] Foreign Affairs and International Cooperation minister Bernard Membe said yesterday that he would resign if the Opposition proved his controversial remarks about Rwanda were wrong.

Mr Membe was responding to allegations levelled against him by Shadow Foreign Affairs minister Ezekiah Wenje.
Winding up debate on his ministry’s 2014/15 budget proposals in Parliament, Mr Membe offered to resign if Mr Wenje would provide documentary proof that he was wrong when he said last September that the Banyamulenge in eastern Democratic Republic of Congo (DRC) were ethnic Tutsis originating from Rwanda.
“This is a fact that cannot be denied,” he said.
He said the Banyamulenge, who formed the M23 rebel group that fought the DRC government for a number of years, were Tutsis originating from Rwanda, while members of the the Democratic Forces for the Liberation of Rwanda (FDLR) were Rwandans, who fled to eastern DRC after the 1994 genocide.
“When I told the BBC that Rwandans were causing instability in Eastern Congo, I meant what I said…it’s the UN’s group of experts that originally accused Rwanda, not me,” Mr Membe told Parliament.
He admitted that relations between Tanzania and Rwanda were strained, but added that “opportunists” had taken advantage of the situation to fuel diplomatic tensions between the two countries.
Presenting the Opposition’s response to the ministry’s budget proposals earlier, Mr Wenje accused Mr Membe of stoking diplomatic tensions between the two countries.
Although Mr Membe made no mention of the frigid relations in the speech, Mr Wenje said the minister was to blame for the situation.
This forced Mr Membe to hit back when responding to MPs’ views, accusing Mr Wenje of being a stooge of a foreign country. The shadow minister strongly denied the claim.
Mr Wenje, who is also the Nyamagana MP, earlier told Parliament that Mr Membe’s remarks on the BBC’s Focus on Africa programme had worsened the fragile relations between Tanzania and Rwanda.
He said such comments could only heighten confusion and anger among ordinary citizens of the two countries. The shadow minister claimed that Mr Membe said Rwanda had exported insecurity and instability to eastern DRC after sending rebels into country.
He said the minister made inaccurate comments about Rwanda and the M23 rebellion in eastern DRC.
But Mr Membe stood his ground, saying what he said was the truth, which had even been documented by UN experts.
Mr Wenje also said the government had not bothered to warn former Rwandan Prime Minister Faustine Twagiramungu after he was quoted saying he had held talks with Tanzania to strategise on how the FDLR could take over power in Rwanda.
Tanzania has repeatedly stated that if Mr Twagiramungu visited Dar es Salaam, he came on a private visit and was not invited by the government as claimed by the News of Rwanda website.
Mr Membe said Tanzania was playing a key role in finding lasting peace in the Great Lakes Region.
The United Nations Force Intervention Brigade, also known as the SADC Intervention Brigade and led by Brigadier General James Mwakibolwa from Tanzania, had successfully dismantled M23 restored peace in eastern DRC, he added.
Relations between Tanzania and Rwanda took a plunge in May 2013 following President Jakaya Kikwete’s appeal to Rwanda to engage FDRL rebels in talks.
Mr Kikwete’s suggestion at a meeting of the Great Lakes countries, which met on the sidelines of the African Union summit in Addis Ababa, did not go down well with Rwandan President Paul Kagame.
The government in Kigali links the FDLR with the 1994 genocide, in which over 800,000 people, mainly Tutsis and moderate Hutus, were slaughtered.
M23, which dominated the North Kivu Province since the end of the Second Congo War in 2003 before it was defeated last year by a joint force from Tanzania, South Africa and Malawi, is a reincarnation of the National Congress for Defence of the People.
In April, 2012 up to 700 former CNDP soldiers mutinied against the DRC government that was being supported by the peacekeeping contingent of the Unites Nations Organisation Stabilisation Mission in the Democratic Republic of Congo (Monusco). The mutineers formed M23, also known as the Congolese Revolutionary Army, which was allegedly bankrolled by neighbouring Rwanda. * Source the citizen
]]>
0

One response to “Membe: 'Prove I was wrong about Rwanda stoking war in DRC, and I'll resign'”