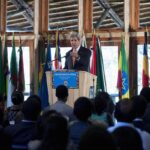 ADDIS ABABA, Ethiopia (AP) — America’s top diplomat said Saturday the U.S. is ready to help increase its ties with Africa, but nations across the continent need to take stronger steps to ensure security and democracy for its people.

In an Africa policy address to members of the Addis Ababa diplomatic corps and the Young Africa leader network, U.S. Secretary of State John Kerry highlighted crises in Nigeria, South Sudan, Somalia and the Central African Republic and urged Africans to demand stability and financial development.

He called for an expansion of American investment in Africa and noted that U.S. companies IBM, Microsoft and Google already have spent more than $100 million on projects across the continent.

“So this is clearly a moment of opportunity for all Africans,” Kerry told about 100 Ethiopians at an environmentally-friendly auditorium on a mountaintop. “It is also a moment of decision.”

The Obama administration has sought to expand U.S. private investments in Africa, and last year financed about $1 billion to support American businesses across the continent, including an estimated $650 million in sub-Saharan Africa.

Elizabeth Littlefield, president and CEO of the U.S. Overseas Private Investment Corp., described Africa as the world’s next front for development, largely in part because of a huge rise in the continent’s middle class. She said the number of African households with disposable income will double over the next decade.

Africa has the natural resources, capacity and the know-how for economic development, Kerry said, adding that the U.S. is the continent’s “natural partner.”

He said that over the next three years, 37 of the 54 African nations will hold national elections with millions of voters going to the polls. And he called on Africans to combat the political corruption that the African Union says has cost the people of Africa tens of billions of dollars.

“That money could build new schools and hospitals, new roads and bridges, new pipes and power lines. That’s why it’s a responsibility for citizens in Africa and in all nations to demand that public money is providing services for all, not lining the pockets of a few,” Kerry told the gathering.

But Kerry warned that “a new Africa” cannot emerge with becoming “a more secure Africa.” 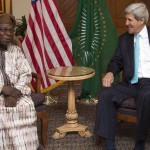 US Secretary of State John Kerry (R) meets with Olusegun Obasanjo, chairman of the African Union’s South Sudan Commission of Inquiry, in Addis Ababa on May 2, 2014 (AFP Photo/Saul Loeb)[/caption]

“In too many parts of the continent, a lack of security, the threat of violence, or all-out war prevent even the first shoots of prosperity from emerging. The burdens of past divisions might never be completely eliminated but they must never be allowed to bury the future,” he said.

Kerry also warned of the dangers climate change, noting that according to a recent U.N. report parts of Mombasa, Dakar, Monrovia and dozens of coast African cities could be under water by the middle of the century.

“Africa has 60 percent of the world’s arable land. That is a tremendous opportunity for the future, not just to feed Africa’s people, but to feed the world,” he said. But because of climate change and global warming, yields from rain-fed agriculture in parts of Africa could decline by half.

“When 97 percent of scientists agree that the climate is changing, that it is happening faster they even predicted, and that humans are the significant cause, let me tell you something, we need to listen. We need to act,” he said.