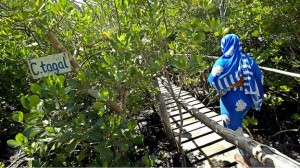 Kenya’s coastal town of Malindi may look like a tropical paradise but is host to a hidden child sex trade. Children as young as 12 say they are being lured into prostitution and pornography by tourists willing to pay handsomely for sex in secret locations. BBC Africa’s Charlotte Attwood went to Malindi to investigate.

Just beneath a wall on one of the busy tourist beaches in Malindi, children loiter in the hope of attracting a customer. I met two girls and a boy – all under the age of 18 and all who admit to selling their bodies to foreigners for sex. In a good month, they can get a client every day, one of the girls said. Most of the tourists in Malindi come from Italy and their clients are mostly Italian men between the age of 50 and 80, she said. ‘Tourist etiquette’ With a dull look in her eye, 16-year-old Maria explained how she goes about her daily business. “I ask my friends who work as beach boys to find me a male tourist. When I get a client we strike a deal, say for $60 (£35),” she says. While I was sitting with the children, I saw an elderly man approach the two girls with money in his hands. Once he spotted me, he signalled to the girls that he would be back later. The authorities in Malindi have been trying to tackle the problem and hotels now bar young local girls from visiting tourist rooms. ‘Seaweed as mattress’ But Naomi Kazungu, the local government child protection officer, said that this has created another problem, as the trade has been driven underground. The children are no longer going to hotels but to private villas, Ms Kazungu said. Peter is one of the beach boys in Malindi who admits to facilitating this business. He took me 300 metres (1,000ft) up the beach, around a rocky escarpment to a cave. It is a favourite spot for sex tourists, he told me, especially those who go for children. The trade is illegal in Kenya and this is a perfect hideout. As the tide comes in, the caves become cut off from the rest of the beach. There is a lot of dead seaweed on the floor that is used as a mattress, Peter says. The tourists prefer girls aged 15-17, he adds. Some of these men, Peter says, like to involve dogs and pay the girls up to $500 to film this. It is difficult for the authorities to tackle this practice. A child prostitute, I was told, can earn more in a couple of days than a teacher does in a month. So many children drop out of school in search of their fortune. Ms Kazungu said she had heard of four such cases in the past two weeks from just one school. ‘Marrying an Italian’ [caption id="attachment_9381" align="alignright" width="300"] 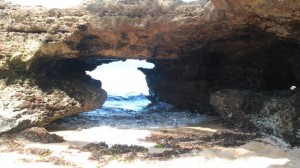 When the tide comes in, this cave is cut off from the rest of the beach[/caption]

With the sex trade so hidden, deputy area chief Nicodemus Mwayele says it is very hard for them to know at what level their children are being abused.

People only come forward and report when the deal goes sour, he says. And in many cases, the abject poverty in the area makes it very easy for those reporting it to be paid off. The traditional chiefs of the area hold “barazas”, or public gatherings, to educate the parents and members of public about child rights. Chief Mwayele told me that this, combined with an operation he started four years ago to get children back to school, has meant 2,000 of them have returned to the classroom. The tourist police are stationed along the beach and their job is to patrol the area. So how can this go on under their nose? Peter believes they know exactly what is going on but tourists pay them to turn a blind eye.

I tried to talk to the police in Malindi and put to them the allegations that some of their officers were complicit.

They were unable to give an interview but off the record said no cases of a tourist molesting a child had been reported. Despite the lack of official reports, Ms Kazungu finds it hard to disguise her fears. “The children in Malindi are not safe. Sometimes we fear that there will be a time when we will not have children in Malindi,” she said. “There are so many issues of child abuse and child prostitution is very rampant.” As the practice continues to go unreported, it makes it very hard to combat. Many members of the public keep quiet when they know it is going on. People pass by the caves and turn the other way and some parents do not ask questions when their children come home with extra cash, I was told. This is because, Ms Kazungu says, people think that to get rich you have to marry an Italian. “So for them when you tell them to go to school, it’s like you are lying to them,” she says. When asked if she thought what some tourists were doing to her was wrong, Maria said: “It’s right because they give us money. It shouldn’t be stopped.” And so the conspiracy of silence continues. *Source BBC]]>