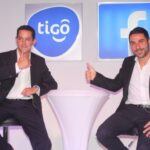 It’s thumps up by Tigo Tanzania General Manager, Diego Gutierrez (L), and Facebook representative, Nicola D’Elia, during the launch of a historic partnership between their two companies today in Dar es Salaam[/caption] Tigo Tanzania (http://www.tigo.co.tz) announced today a partnership with Facebook in which all its customers in the country will get free access to Facebook services in English and a new Kiswahili version through their mobile handsets. It is the first time that Facebook will be free on any mobile network in East Africa, according to Tigo General Manager Diego Gutierrez. Speaking at the launch of the partnership in Dar es Salaam, Gutierrez said: “What this partnership means is that Tigo customers can, for the first time, access Facebook through their handsets without incurring any data charges and connect with the social media network’s two millions of users in Tanzania and its 1.2 billion users worldwide. Gutierrez added: “It is the first time any major social media company has made a version in Kiswahili the national language spoken by Tanzanians and majority of the people in East, Central and Southern African region. “Facebook has been a fantastic driver of data on mobile networks. With this unique partnership, we are making Tigo stand out from the crowd and giving many customers their first taste of the internet and social media, including in Kiswahili. That’s what creating the digital lifestyle is all about, and it reinforces our strategy to encourage more Tigo customers to use data as part of their daily communications activity.” The strategic partnership is part of Facebook’s recent Internet.org initiative launched by the company’s founder, Mark Zuckerberg. Guttierrez said “The new service will open new frontiers to Tanzanians and to other Kiswahili speakers by offering them new business, educational and other socio-economic opportunities across the world.” Apart from the five East African Community (EAC) member states, Kenya, Tanzania, Uganda, Rwanda and Burundi, Kiswahili is also spoken in parts of Malawi, Somali, Zambia, the Democratic Republic of Congo and Mozambique. With this launch Tanzania, a country recognized for being the cradle of Kiswahili language, becomes the first in the region the region to showcase this language globally, a breakthrough that that Tigo, its parent company Millicom and Facebook takes credit for. This is the second time that Facebook and Millicom have partnered following the joint launch of free mobile access to Facebook with Tigo Paraguay in December 2013 and the service’s launch in the historical native Guarani language there. Nicola D’ Elia, Facebook Director for International Growth and Partnerships commented “We’re excited to be working with Tigo again to give more people in Tanzania the ability to share and connect free of data charges across Facebook apps and mobile website, and now in the traditional language of Kiswahili.” Tigo (http://www.tigo.co.tz) started operations in 1994 as the first cellular network in Tanzania. It now covers 30 regions in mainland Tanzania and Zanzibar.  Tigo strives to be Tanzania’s most innovative mobile phone operator, offering services ranging from affordable mobile voice communications to high speed Internet access and mobile financial services through Tigo Pesa. Tigo is part of Millicom which provides affordable, widely accessible and readily available cellular telephone services to more than 50 million customers in 13 emerging markets in Africa and Latin America. The success of Tigo is based on the “Triple A” strategy, which stands for Affordability, Accessibility and Availability. We create a world where mobile services are affordable, accessible and available everywhere and to all. This guarantees that our subscribers experience the best services at the most affordable rates throughout all 30 regions in both Tanzania Mainland and Zanzibar. *Source APO]]>