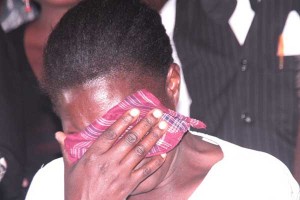 A woman breaks down in tears after seeing the body of a relative who died after drinking the lethal brew that has so far claimed 76 lives. PHOTO | CHARLES WANYORO NATION MEDIA GROUP[/caption] On a Wednesday two weeks ago, an office worker took the afternoon off to attend a friend’s funeral.

That evening, he and other friends who had attended the burial met at a bar to “see off” their departed friend. They drank until the following morning.
Like that office worker, many Kenyans use every excuse in the book to indulge in alcohol – from a toast to good fortune, celebrating a wedding or the birth of a child or to cope with tragic news, such as death and divorce. In short, every occasion presents an opportunity to reach for the bottle.
Indeed, according to Nacada, 16.6 per cent of the urban population consumes an alcoholic beverage of some sort, compared to 11.4 per cent in the rural areas. The report also shows that Rift Valley leads in the consumption of traditional brews with six per cent of its population partaking, while western Kenya and Nairobi top the charts in the consumption of chang’aa with 7.1 and 7.2 per cent of their respective populations consuming the spirit.
Nairobi and Central also lead in the consumption of mainstream brews with 15.7 and 9.2 per cent of their populations making regular trips to the bar.
“It is true that we are drinking too much,” Mr Shadrack Kirunga, a counsellor, said in an interview with the Nation on Wednesday.
He spoke as the death toll from the lethal brews consumed in six counties rose to 76, with 181 people still in hospital.
Kenyans’ drink problem, he said, starts taking root in universities, where it is fuelled by peer pressure, easy accessibility of alcohol, opportunity and the freedom to do whatever one wishes with one’s free time.
“Drinking is a big issue in our universities, which, unfortunately, graduates with many of us to our places of work, marriages, and other relationships we form.”
SELF-ESTEEM
According to him, Kenya’s drink problem is largely driven by low self-esteem, especially among men.
“Kenyan men feel that the women in their lives have become too strong, too independent, too smart and too educated – this is difficult for some men to handle, and so they end up feeling inadequate. To deal with this, they turn to alcohol,” he said.
Due to changing economic roles, men are no longer the sole providers for their families and their authority is no longer absolute. Interestingly, it is not just the men who earn less than their spouses who have been left nursing bruised egos; even the successful men still feel intimidated by strong women surrounding them.
“This problem will continue unless men re-orient themselves to the new social structure,” Mr Kirunga said.
Mr Paul Mbatia, a sociologist, said there would be no harm if Kenyans drunk to relax. However, the majority do so to escape their problems.
“The poor drink excessively because they are unemployed, unable to educate their children, and unable to fulfil other responsibilities that only money can fulfil,” he said. The rich, on the other hand, “tend to drink more than they should because they are unhappy, especially if there is no peace at home.”
The second reason he gave was that most Kenyans have no idea what to do with leisure time.
“There are people who have not found a better way to spend their time, the bar therefore becomes the most convenient place to go.”
Women, according to Mr Mbatia, drink to show that they are liberated. “It is their way of saying, here we are, we are women, and can do what men can do.”
However, Nacada boss John Mututho said access to alcohol was the number one reason turning Kenyans into alcoholics.
“When you get to a point where 10 shillings can get you alcohol, then you know you are headed for disaster,” he said. *Source Daily Nation
]]>