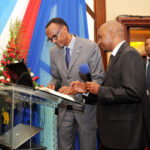 President Kagame logs in to the Kenya National Electronic Window System (Kenya TradeNet) during 5th Northern Corridor Integration Projects Summit in Nairobi yesterday. Village Urugwiro.[/caption] President Paul Kagame yesterday launched Kenya National Electronic Single Window System seen as a major boost for regional trade since it will simplify clearance processes of goods. The launch was part of the activities of the 5th Northern Corridor Integration Projects Summit held in Nairobi, and was attended by Presidents Kagame, Uhuru Kenyatta of Kenya and Yoweri Kaguta of Uganda, as well as the second vice president of Burundi and Tanzania’s prime minister. Rwanda, Uganda and Kenya – which heavily rely on the Kenyan port of Mombasa – are spearheading a series of joint projects aimed at fast tracking regional development through joint infrastructure, trade and political and economic integration. The use of Electronic Single Window System is expected to centralise trade services such as tracking of goods, custom clearance, and electronic payment including through mobile money. The system will also integrate with Kenya Revenue Authority, making the clearance at Kenyan ports a lot faster and easier. “I just want to reiterate how this is one of many important projects that the East African Community partner states have undertaken to deepen integration that we have been seeking, make business more efficient, and lower the cost of  doing business as we move forward,” Kagame said at the launch. Making tech tick He reiterated Rwanda’s “continued active participation towards making integration a reality.” President Kenyatta and his deputy William Ruto described the Single Window System as yet another building bloc in the EAC integration process. “Our ultimate vision should be to implement an EAC Regional Single Window platform. The benefits from this initiative may not be fully realised unless all of us in the region adopt National Single Window Systems. “Our brothers in Rwanda are already implementing a Single Window System and similar efforts are underway in Tanzania and Uganda,” Kenyatta said. He added: “I truly believe that completion of these projects will make our region a world leader in terms of trade facilitation.” The Kenyan leader said the technology will make it possible for traders to submit information about their goods to multiple government agencies in multiple locations, making business faster and more efficient. After the launch of the Kenya National Electronic Single Window System, also known as Kenya TradeNet, the Heads of State and Government discussed the progress of several other projects under the Northern Corridor initiative. South Sudan on board In the meeting, the EAC leaders were joined by South Sudan President Salva Kiir Mayardit, whose country officially joined the Northern Corridor Integration Projects framework during the third summit in Kigali in October 2013. President Kenyatta said he was happy with the progress made in implementing the projects so far since the Principals’ inaugural meeting in June last year. Key areas discussed include power generation and interconnectivity, oil pipeline development, capacity building, establishment of commodity exchange, fast-tracking of political federation, construction of the railway, and defence, security and peace cooperation. The summit agreed to fast track the establishment of the commodities exchange, and committed to establishing a centre of excellence in respective countries and to ensure all citizens of partner states, including South Sudan, are able to attend institutions of higher learning for the same fee as nationals. Rwanda was designated as the one to take the lead in establishing a centre of excellence for GIS related training. The partner states also agreed to urgently address the issue of use of national ID with all member states national airlines, remove immigration barriers to labour and service provision and operationalise one common border post. Rwanda will take the lead on e-visa issuance for partner states, while member states also committed to developing strategies to reduce air travel cost between partner states. The leaders also agreed that construction of the gauge railway should begin no later than October 2014. In the field of ICT, the partner states agreed to implement a one area network by December 31, 2014 and incorporate fiber optic access on all Northern Corridor Integration Projects. Meanwhile, Burundi, which was represented by its Second Vice-President, Gervais Rufyikiri, confirmed its full participation in the integration projects. The projects were inaugurated at the summit of the countries that are served by the Northern Corridor held in Entebbe, Uganda, in June last year, bringing together Presidents Kagame, Kenyatta and Museveni. At the Nairobi summit yesterday, Tanzania was represented by its Prime Minister Mizengo Kayanda Peter Pinda. The leaders resolved to meet for their 6th summit in June in Kigali. * Source www.The New Times]]>