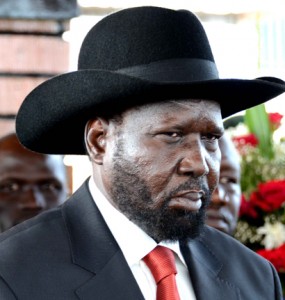 Speaking on BBC’s Hard Talk, South Sudan President Salva Kiir on May 19 provided insights into why the May 9 ceasefire remains shaky. He also offered his thoughts on rebel leader Dr Riek Machar and the Ugandan army’s presence in his country, among others. Alon Mwesigwa transcribed parts of the interview. Three years ago you became a president of a new independent nation, South Sudan, and yet today we sit here and your nation is tearing itself apart. Why? After independence we thought that we have a task to deliver services to our people, which we promised them during the war. But some of my colleagues were impatient …and so they had wanted to get into power very quickly, and this is what is tearing our country into pieces. Do you accept responsibility yourself for what has happened to South Sudan today? … But I can’t accept mistakes of others, especially after the 15th of December 2013 [incident] because that was uncalled for. Explain to me what do you mean by uncalled for? There was no reason for leaving peaceful talks and going to wage war against the nation. This was the crux of what has become the conflict. Riek Machar who was your vice president until you sacked him in the summer of 2013 claims that in December 2013, your presidential guard moved against Nuer people inside that unit, and that that was the beginning of what became the conflict instigated, he says, by you He was lying. I don’t think I can do that. The presidential guards unit, even now, has no reason to move against any Nuer soldier in that unit. The second in command of that unit is a Nuer and he is still with us to date. So if there was any intention of killing any Nuer, why was he left untouched? Riek Machar is now leading an armed rebellion inside the country. The country is in fact in a state of civil war. You met him in Addis Ababa just a few days ago; you signed a cessation of hostilities agreement and you laid out a process to work together on a new political roadmap, but it sounds to me like he does not trust you and you don’t trust him. Well, as long as we are doing one thing, I can trust him. If he was [serious] I can trust him, but somebody who is not…it would be difficult even it were you to trust such a person. We signed a cessation of hostilities on the 9th of this month, and on the 11th, he violated it – attacking our forces. Do you think he is actually instructing his forces to continue the offensive? Definitely, because he did not give them orders to stop fighting after signing. Are you saying to me that the ceasefire is effectively finished? No, it is not finished on my side. My forces are observing the ceasefire. They are observing it strictly, according to the orders. I asked Machar a few days ago whether he was still in control of all these forces and he insisted he was. I put the same question to you. Are you in full control of all the forces fighting in your name? I am in full control because these are regular forces under my command. What about the Ugandan battalions who are still in this country and involved in this conflict, and what about the Justice and Equality Movement fighters from the south of Sudan who are in your country fighting in your name? No, they are not fighting in my name and they were brought in by Riek Machar and his colleague, Taban Ndiquar. These were the people who brought them in. Mr President, I have spoken to independent security sources and they said Justice and Equality Movement fighters from Darfur are in your country and fighting in your name Well, I don’t believe that. The time they came in is over. So they did come in? They came in when Taban was the governor. And what about the Ugandans? Okay. The Ugandans are in South Sudan. They came in after the incident in December. But there are Ugandan forces who have been here since 2006 and they were brought in by Riek Machar. There is irrefutable evidence that the Ugandans have been fighting on your side. I don’t deny that. They fought in Bor and they stopped there, and they haven’t gone anywhere [else]. They are here in Juba and Bor. And they have used cluster bombs No. I never heard that. But why, when one of the international ammunitions clearance organizations asked for permission to go and clear cluster bombs from an area around Bor, they were not given permission. Is it because you were embarrassed about what the Ugandans are doing? Not at all; Not at all, I never got that information that some agency wants to go and clear any mines around Bor. I never got that. You characterize this as a conflict instigated by Riek Machar. But the truth right now, it looks like this is a conflict between tribes with deep ethnic hatred fueling the fighting. [caption id="attachment_9305" align="alignright" width="300"] 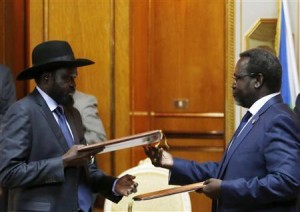 South Sudan’s rebel leader Riek Machar (R) and South Sudan’s President Salva Kiir (L) exchange signed peace agreement documents in Addis Ababa May 9, 2014. REUTERS/Goran Tomasevic[/caption] Well, it is him who has actually incited the Nuer against Dinkas. But on our side, we have never done that. The hatred, yes it has been planted in there by Riek Machar and we on our side, we always defuse it and tell people, no, there is no revenge. The first serious outrageous acts of violence based on ethnicity appear to have taken place here in Juba right after December 15. We have reports backed by evidence from the UN and Amnesty International of your troops going into neighbourhoods in this city seeking out Nuer men, taking them to security facilities and murdering them. When I got the information that there were killings going on in the estates around Juba, I set up a commission and then sent in troops to arrest whoever had taken the law into his own hands. But with respect, it was the security forces that were doing the killing based on ethnicity. Do you accept that? I will not accept until they are investigated and then it is confirmed. Because of those incidents and the deaths of hundreds of Nuer people and the fact that you know right across this city, Nuer people thousands and thousands of them fled for their lives to the safety of UN camps. What we now have is a conflict which looks dangerously like a Rwanda style ethnic conflict. It will not. It will not go to that stage. These people who had run to the UN compound are now coming out on their own because they have seen there is nobody who is targeting them. But what about the people in those camps who are still frightened for their lives? Those who are inside the camps are actually people who have been politicized, because Riek Machar is sending messages that ‘don’t come out. We are coming to liberate you when we capture Juba.’ The UN secretary general has said those responsible for the atrocities and systematic human rights violations should be held to account in a special tribunal. I agree. But that could be you It can be me. If it is me who has given orders, I don’t mind facing the law. Did you give orders? I did not. I did not give orders for the fighting; Riek Machar gave orders for the fighting. And if you were to listen to the security people, you will get to know he was ordering his forces to open fire. To be clear then, in the short term will you invite him back into some senior government positions – may be to become vice president again? Well, we will come together; it is now being discussed in Addis Ababa and when people reach to the conclusion of that thing, we will come together again and we hold a reconciliation conference, and after that we will see what position to be given to whom in an interim arrangement. He says you talk of interim arrangements which if it happens you will not be facing elections in 2015, which is your intent of staying in power up to 2017 It is not me. Who is it then? It is not me, it was pushed into my mouth. Pushed into your mouth? By the Americans; they said no room for elections. I said okay, when do you want the elections to be held? I was here with John Kerry (US Secretary of State). John Kerry basically demanded that you postpone your own elections? Yes. Riek Machar says the problems of this country can only be addressed if you leave the presidency because you no longer have legitimacy. It is not true. My presidency is still on up to next year when we are supposed to go for elections by July. Might you stand down next year? Well, we have not yet reached next year. Is it a possibility that you will leave office voluntarily next year? We cross our bridges when we reach them. We don’t cross the bridge before we reach there. There is a massive humanitarian crisis developing in South Sudan. I spoke to the director of the World Food Programme and he says it’s no longer a question of whether people die of hunger in your country. It’s a question of how many. He is concerned that your government does not understand how serious the situation is. No, we understand, but it is not our making. It is a man-made disaster and this is why we want the war to stop so that we allow humanitarian agencies access to everybody in the country. If Riek Machar was to understand that the civil population is going to face one of the worst famines that has ever been witnessed in South Sudan, this is the time to come out. You are using the word famine. Are you? Yes. What will happen when people starve to death? I mean you sit here as a president of your nation and you tell me that you believe your people are facing famine. Isn’t that something which suggests you have failed? Do you want me to deny that if this thing continues there will be no famine? I cannot deny it. Facts are facts and they have been said. We have to stop this fighting so that we save the people. *observer.ug]]>