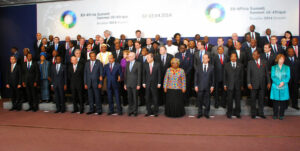 Leaders of the European Union and their African counterparts pose in a group photo during the recent EU-Africa Summit in Brussels, Belgium. African leaders have come under fire over the manner in which they grant foreign powers and multinationals with land concessions leaving their own people landless.[/caption] In the field of farmland leases and sell-offs (commonly referred to as land-grabbing) the current crop of African leaders may well be accused of exceeding their mandate to the point of treachery to their continent, their people and to future generations of Africans.