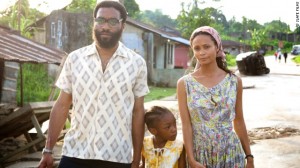 Directed by Nigerian Biyi Bandele, “Half of a Yellow Sun” is a 2013 romantic drama starring Chiwetel Ejiofor and Thandie Newton.[/caption] When I heard last month that the Nigerian Film and Video Censors Board, headquartered in Abuja, had indicated that it would be unable to issue certification for “Half of a Yellow Sun” in time for the film’s release date, I naturally assumed, at first, that what we were faced with was nothing more sinister than another instance of the typical, if frustrating, culture of wilful incompetence that we’d grappled with during the making of the film — while shooting the film in Nigeria two years ago, there were times when we felt ensnared in impenetrable jungles of red tape, when we would be given the go-head by one arm of the government only to find our path blocked by the other arm. I had no reason to assume that there might be anything more to it than that. I had no reason to assume, for instance, that the inability of the board to issue the film with a certificate might actually be a clumsy, heavy-handed ban in all but name. After all, when the movie had its world premiere at the Toronto International Film Festival last autumn, amongst the entourage of Nigerians who flew in to Toronto for the occasion was Patricia Bala, director-general of the Nigerian censorship board. Bala had arrived in Toronto — I was told — with several of her colleagues from the censor’s office. I know for a fact that they watched the movie. I do not know for a fact that they all liked it. I cannot say if any one of them stood up when, as the end credits rolled, the audience rose and gave the film three standing ovations. But I do know that Bala was gracious enough to tell us after the screening how much she loved the movie. At no point did she express any reservations about the contents of the film. It is now nearly eight months since Bala and her board first saw the movie in Toronto and a few weeks since she and her board have failed to issue “Half of a Yellow Sun” the certification that it needs — that the law requires it obtains before it can be shown in cinemas in Nigeria. [caption id="attachment_9532" align="alignright" width="300"] 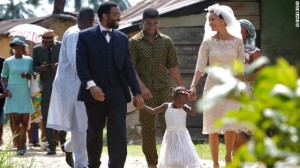 The film is an adaptation of Nigerian writer Chimamanda Ngozi Adichie’s bestselling novel of the same name[/caption] In those several days I’ve been assailed — on Twitter, Facebook, and by email — with rumors, innuendos, half-truths, and downright lies, disseminated sometimes directly from the censorship board (they have issued at least one press statement), about why “Half of a Yellow Sun” still hasn’t been issued with a ratings certificate. The board claims that is has not banned the film but certain aspects of it “have some unresolved issues which have to be sorted out in accordance with the law and laid down regulations.” It has been rumored that FilmOne, the Nigerian distributors of “Half of a Yellow Sun,” might have been late in submitting the film for certification. Not true. Most films that are screened in Nigerian cinemas are shown to the censor only a day or two before the films open to the paying public. In documentations that have been shown to me, there are instances even of movies being shown to the censor days after the movies had officially opened to the public. “Half of a Yellow Sun” was scheduled to open on April 25. It was submitted to the censorship board at least two weeks earlier. I’ve also heard tell that the censorship board’s inability to make a decision about a ratings certificate for my film has been brought upon it because of a sudden concern that a movie that depicts scenes from the Biafra war might provoke “tribal violence” in a country that has in recent months been besieged with terrorist bombings and profoundly shaken by the abduction of over 200 school girls by Boko Haram. Since the Toronto premiere those many months ago, I’ve seen “Half of a Yellow Sun” at other film festivals in all corners of the globe. And Nigerians being the ubiquitous people that we are have been present in the audiences — quite often in great numbers — at each of these festivals. [caption id="attachment_9533" align="alignleft" width="300"] 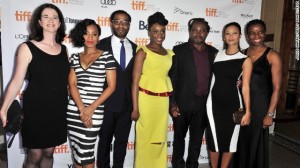 “Half of a Yellow Sun” premiered during the 2013 Toronto International Film Festival on September 8, 2013 in Toronto, Canada.[/caption] I am yet to meet a single Nigerian who has seen the film who came out of the cinema thinking that they had just seen a film that would incite anyone to violence. If anything, more than once, I’ve been accosted by cinema-goers — some Nigerian, but really, people of all races — who have been profoundly moved by the experience of watching the film. The refrain I’ve heard from them is, war is nasty, isn’t it. Whether or not the film eventually gets a ratings certificate in Nigeria, “Half of a Yellow Sun” will be seen by millions of Nigerians. The question is: will they be allowed to see it in their local cinemas and on legally acquired DVDs or will they be forced to watch it on pirate DVDs and through illegal downloads? If the biggest film that’s ever been made in Nigeria is available to Nigerians only in bootleg form, the censorship board will be doing to the Nigerian film industry what Boko Haram is trying to do to Nigeria: drive a stake through its heart. I sincerely hope they both fail. * source CNN .Nigerian Biyi Bandele is the director of “Half of a Yellow Sun” (2013), a film based on a novel by Chimamanda Ngozi Adichie about the Biafran war, in which over a million people died. ]]>