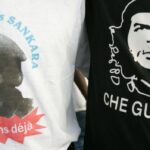 The late president of Burkina Faso, Thomas Sankara – an icon for many young Africans in the 1980s – remains to some a heroic “African Che Guevara”, 27 years after his assassination at the age of 38.

Be it through the red beret, worn by firebrand South African politician Julius Malema, or the household brooms being wielded at street demonstrations in Burkina Faso, there are signs that his legacy is enjoying a revival.

Praised by supporters for his integrity and selflessness, the military captain and anti-imperialist revolutionary led Burkina Faso for four years from 1983.

But he is seen by others as an autocrat who came to power through a coup and valued discipline above human rights. Sankara was a staunch defender of all things home-grown – such as cotton – and yet the African textile industry failed to make him a T-shirt icon. While Burkina Faso’s former leader may not be the poster boy of revolution, like Argentine-born Che Guevara, many taxis across West Africa have a round sticker of him in his beret on their windscreens. His influence is still felt as far afield as South Africa, argues columnist Andile Mngxitama. ‘Common good’ [caption id="attachment_9197" align="alignright" width="150"] 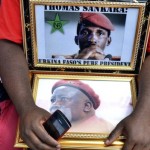 In South Africa,EFF party respects the credentials of Burkina Faso’s former leader[/caption] “The elections in South Africa [next month] are about the memory of Thomas Sankara,” says Mr Mngxitama, who is also the commissar for land and agrarian revolution for South Africa’s new Economic Freedom Fighters (EFF) party. “They are about the ideal that political power can and must be used for the common good.” The EFF was launched by Mr Malema, who supports the partial nationalisation of South Africa’s mining and farming sectors, as “the new home for voiceless, indigenous poor South Africans” after he was expelled from the governing African National Congress (ANC).

Sankara’s spirit is also behind a protest movement that began last year in his homeland of Burkina Faso, a former French colony.

Called Le Balai Citoyen, meaning “the citizens’ broom”, it campaigns against moves by President Blaise Compaore to extend his hold on power beyond 2015. Once Sankara’s deputy, Mr Compaore came to power after his friend was shot dead by a group of soldiers in October 1987. “We carry brooms because we want to sweep out the president and his clique,” says 43-year-old musician Samsk Le Jah, the man behind Le Balai Citoyen. As a teenager he says he received his “political education” in Sankara’s Pioneer youth movement. “The broom is also a tribute to Thomas Sankara, who organised weekly street-cleaning sessions,” he says. “African leaders have so much to learn from Sankara about humility and public service.” Benewende Sankara – no relation of the late socialist leader – agrees. “Sankara’s spirit still floats over Burkina Faso,” says the Sankarist politician, who is also the lawyer for the late president’s family.

At the moment the family is fighting a legal battle to win the right to open the tomb the government built in Sankara’s honour and DNA test any remains found inside as there has been no real investigation into the exact circumstances of his death, which are still hazy.

“He was ahead of his time. The values people agree on today – the need for good governance and reducing consumption – were what Sankara taught us,” says the lawyer. [caption id="attachment_9198" align="alignleft" width="150"] 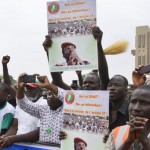 There have been protests against President Blaise Compaore’s plans to run for a third term[/caption] “It was all about produce what you consume, be self-sufficient, be honest and live simply,” he says. “His ministers drove small cars and travelled economy class, Thomas himself rode a bicycle. “Those are values that, if they are heard, appeal to the youth all over the world today.” Sankara’s revolutionary zeal is best remembered in West Africa. ‘Discipline’ But in neighbouring Ghana – whose former President Jerry Rawlings was a firm friend of Sankara – post-graduate law student David Guat, 50, sounds a note of caution when he talks to younger students. Sankara seized power not long after Flight Lieutenant Rawlings had led his second coup. “Sankara copied a lot of Rawlings’ ideas. The two men were firm friends – to the extent that they wanted to merge their two countries. “In those days there was discipline. You went to work on time and you did not sit around reading The Graphic [newspaper],” remembers Mr Guat. “You actually worked. But people were not disciplined because they wanted to be; they were disciplined because they were being checked on. “Human rights were not respected. I have very mixed feelings about that period.” Still, without achieving Che Guevara’s fame, Sankara’s legacy has spread far and wide Eight years ago, when Australian communications specialist Shantha Bloemen had a son with a Zimbabwean human rights activist, Munyaradzi Gwisai, they named him Sankara. “I had read Sankara’s essay on the rights of African women,” she says. “He understood why women are so critical to Africa’s transformation. Ms Bloemen, who works in China, says Sankara had ambitions for the whole African continent. “He wanted a fairer, proud, independent Africa that was equipped to tackle its challenges,” she says. “I can think of no better role model for my son.” For Serge Bambara, a co-founder of Le Balai Citoyen, it is this positive attitude that ensures his legacy. “It allowed us to be more proud to be African and to pull out of that inferiority complex, to realise we can accomplish things,” he told the BBC. “[US President Barack] Obama was not the first to say, ‘Yes we can.'” *Source BBC ]]>