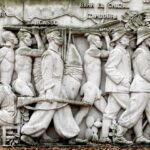 A hoard of cash sits in the Bank of France: $20 billion in African money held in trust by the French government and earning just 0.75 percent interest. Now economists and politicians from 14 Central and West African countries say they want their funds returned and an arrangement dating back to the days of France’s colonial empire ended. France holds the money to guarantee that the CFA franc, the currency used in the 14 nations, stays convertible into euros at a fixed exchange rate of 655.957. The compulsory deposits started more than half a century ago, when the then-colonies had to place all their financial reserves in the French Treasury. The deposit requirement has dropped over the decades: Today the African members entrust 50 percent of their reserves to Paris. That’s a lot of money. According to the 2012 annual report of the Bank of France, the amount of African cash it safeguards is larger than the individual gross domestic products of all but two of the nations in the CFA region. CFA originally stood for Colonies Francaises d’Afrique, and now means either Coopération Finançière en Afrique Centrale or Communauté Finançière Africaine, depending on the country. Member states in the monetary union include Chad, Senegal, Mali, Cameroon, and Ivory Coast. Mamadou Koulibaly, former finance minister and speaker of the Parliament of the Ivory Coast and now an economics professor and leader of an opposition party, says the CFA franc’s peg to the euro discourages companies from investing. “The CFA franc does not favor exports and trade,” he says. “It does not favor industrialization. It keeps prices high. It does not make sense in a globalized world.” The return on the $20 billion also angers the ex-minister, who notes that the money would yield more under professional management. And, he says, the funds benefit France, which uses them to reduce its borrowing. (France, with a debt-to-GDP ratio exceeding 90 percent, has pledged to slash its deficit and debt.) “The operating account was designed and formulated primarily to serve the interests of France. It is important for France and unnecessary for African countries,” says Babissakana, chairman and CEO of Prescriptor, a consulting firm based in Cameroon’s capital of Yaounde. (His single name means “something that cannot be locked” in Yambassa.) To Babissakana, the tiny interest rate paid out is “a state financial crime strictly contrary to the Universal Declaration of Human Rights of the United Nations.” The French Finance Ministry says such criticisms are misplaced. The union’s members “own these deposits. We only manage them,” says a spokesman who asked to remain anonymous. The $20 billion is “not a significant part of the total” of France’s cash on hand and wouldn’t make a difference in its efforts to solve its fiscal problems. “It’s not that France is necessarily wanting these funds,” adds Anne-Marie Gulde, a deputy director of the Africa Department at the International Monetary Fund. “It’s a necessary evil for them, in order to backstop the [fixed exchange rate] of the CFA franc.”

Koulibaly says the tie to the euro makes goods 20 percent to 30 percent more expensive in the CFA zone. This is a hardship for the 90 percent of people in the region who don’t have bank accounts and cannot easily convert their cash to euros. He wants an independent audit of the CFA franc and France to be investigated by the UN’s International Court of Justice. Gulde says the peg might make some prices higher but suggests that it also limits inflation: “Everyone benefits from the control of inflation, including and especially the very poor.” A report presented to French President François Hollande in December concluded that “compared with other countries, growth in the CFA zone has been lower in the past decade.” That’s partly because of the high costs of doing business in a currency tied to the euro and to tight credit policies in the CFA zone. Sanou Mbaye, a Senegalese economist and former official with the African Development Bank, says high export prices and slow growth in the union have limited investments from China, which does twice as much business in Africa as any other country. Says Mbaye, “Exports to China and trade with China lag in the CFA zone.”
The bottom line: A financial arrangement dating from the French colonial era gives 14 African nations currency stability at the cost of growth.
*Neuwirth is a Bloomberg Businessweek contributor.Source Bloomberg
]]>