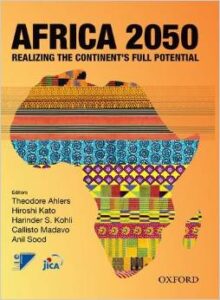 A new book laying out a vision for Africa, “Africa 2050: Realizing the Continent’s Full Potential” was launched on Day 2 of the African Development Bank’s Annual Meetings in Kigali. The book grew out of a study commissioned by the 5th Joint Annual Meetings of the African Union (AU) and the ECA Conference of Ministers and supported by the Japanese International Cooperation Agency (JICA) Research Institute. According to one of the editors of the book, Callisto Madavo, Africa is at a critical turning point and what its leaders do today will determine where the continent will be socially and economically in 2050, and whether the continent’s fast-rising aspirations of Africans are met or crushed. “Africa 2050 offers a vision of what could be an Africa that meets the aspirations of its people and is catching up with the rest of the world in living standards and competitiveness,” stated Madavo, who is also a visiting professor in the African Studies Program at Georgetown University. He further added that, in such a scenario, by 2050, the average per capita income would increase sixfold, an additional 1.4 billion Africans would join the middle class, the number of poor would be reduced tenfold, and Africa’s share of global GDP would triple. For people of the continent, the biggest change between now and 2050 would be better, less vulnerable jobs with higher productivity. For African economies, the biggest change would be dramatic productivity improvements. For the continent, the biggest change would be much better integrated sub-regions and relations with the rest of the world based on trade and investment rather than aid. “This vision is possible but certainly not guaranteed – it is just one of several possible scenarios,” observed Theodore Ahlers, who was also part of the team which edited the book and is a Senior Associate at Centennial Group International. He said that complacency and inadequate political resolve are the biggest threats to its realisation. “It’s easy to slip into the illusion that recent strong performance is a trend that will quasi-automatically continue,” he remarked. Africa 2050 highlights that to achieve its vision, Africa needs capable states that deliver security, have strong institutions, rule of law, and are accountable to their citizens. The book lays out a strategic framework and action agenda for realizing the bold vision. While the action agenda must be country-specific, Africa 2050 identifies 10 common priorities that cut across the continent and argues that realisation of the vision depends ultimately on pragmatic leadership, the quality of governance and how institutions work. Kunio Okamura, Senior Special Advisor to the President of JICA who presided over the launch, commended the editors for a job well done. “We hope that the debate around this book will shape the political decisions to make the scenario of an Africa that could be presented in Africa 2050 a reality,” he acknowledged. The book was published by Oxford University Press in March of this year (2014) and is also available on Amazon. More than 3,000 delegates are attending the Annual Meetings of the African Development Bank (AfDB) to discuss new strategies to tackle poverty, underdevelopment, and put their weight behind global negotiations to ensure the continent enters a new era. *Source AFDB]]>