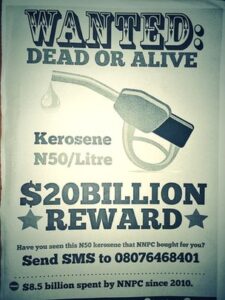 Nigerian President Goodluck Jonathan wants the world to believe he and his government are serious about ending corruption. But two recent events have sent out the opposite message.

As President Jonathan handed out awards to celebrate Nigeria’s centenary, there was a collective leap of eyebrows when people learnt that former President Sani Abacha was on the list. Many wondered why a military dictator who had plundered the nation was being celebrated? As if people needed reminding, during that same week the United States announced that it was freezing $458m (£275m) that had been stashed away in foreign bank accounts – part of at least $3bn that Abacha is believed to have looted during the 1990s.

A presidential spokesman tried to calm things down by stating that the centenary award was “not a test of sainthood” but was for Abacha’s “contribution to keeping the country together”.

The renowned Nigerian writer Wole Soyinka was so incensed he rejected his own award, describing the former president as “a murderer and thief of no redeeming quality” and “a man who placed this nation under siege during an unrelenting reign of terror”. Corruption on another level The second event came after outspoken Central Bank governor Lamido Sanusi had accused the state oil company, Nigerian National Petroleum Company (NNPC), of failing to account for $20bn in oil revenues. Some critics accused Mr Sanusi of playing politics but when he was then accused himself of financial recklessness and was suspended, it was widely seen as a move to silence a whistleblower who was causing the government embarrassment. As one Nigerian told me: “Excuse the crudeness but Mr Sanusi had become a mosquito on the president’s testicles” – the dilemma being whether to ignore or to smash. It was by no means the first time that corruption in the NNPC was being highlighted. But this is on another level. The allegation is that more than $1bn was disappearing every month over a 19-month period. Mr Sanusi said he was speaking out because of the potential impact on the entire economy. “Oil prices are over $110 [per barrel] and we have a relatively healthy current account surplus yet we are facing exchange rate pressures, which is the last thing we should face at this point in time,” Mr Sanusi told the BBC on one of his last days in his Central Bank office. He said he hoped a parliamentary investigation would also find out why the country’s Excess Crude Account had fallen from $11.5bn to under $2.5bn in a year – arguing that Nigeria’s savings are a vital buffer against any drop in the global oil price and without this “rainy day” account, the economy is vulnerable and exposed. The kerosene scandal Part of the Central Bank report focuses on kerosene – the fuel Nigeria’s low earners use to cook. [caption id="attachment_8854" align="alignright" width="300"] 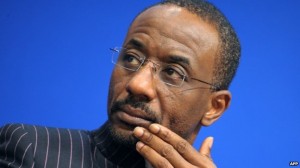 Lamido Sanusi accused Nigeria’s national oil company of failing to explain missing funds[/caption] You only have to ask one question to discover that millions of people are being ripped off: “How much do you pay for your kerosene?” “Sometimes 140 naira a litre or 160 naira ($0.85 to $0.97),” Alimatu tells me as she tops up her small stove in a cramped alleyway that serves as her kitchen in the lively Lagos suburb of Obalende. Preparing a fiery fish pepper soup, Alimatu adds that it is a major part of her expenditure. “If all the children are at home, I finish this five-litre can in just three days.” She is unaware that due to a government subsidy on kerosene it is supposed to be available for around 40 naira a litre. The state oil company has been billing the treasury to recoup the money it spends subsidising the price of kerosene. But why are Nigerians not getting it at the cheaper price? The Central Bank report suggests that, by not passing on the benefit to the consumers, a consortium has been collecting $100m a month in a scam. At the parliamentary hearing, Oil Minister Diezani Alison Madueke and state oil company officials denied allegations of malpractice and said all the “missing” money would be accounted for. But when Finance Minister Ngozi Okonjo-Iweala stated that the kerosene subsidy was not provided for in the country’s budget, the alarm bells went up a few decibels. In a BBC interview I asked Mrs Okonjo-Iweala how it could be that as much $100m a month in the kerosene subsidy had not been budgeted for. “It wasn’t budgeted for and that’s all I have to tell you. The subsidy was deducted at source by the NNPC. We didn’t budget for it,” she said, stating that a forensic audit was needed. “Let us look at the amounts and the reasons being advanced for how much is missing. Audit that process. Audit what the NNPC is saying it used the money for and establish legitimately what is the shortfall.” ‘I know why I’m here’ Nigeria’s finance minister has a formidable international reputation, having worked as a managing director at the World Bank. But analysts say she is now in a dilemma. “The finance minister is a reformer at heart but she is in direct conflict with very deep vested interests,” says financial analyst Bismarck Rewane. “She has to confront those vested interests or else her credibility as a reformer goes.” [caption id="attachment_8856" align="alignleft" width="300"] 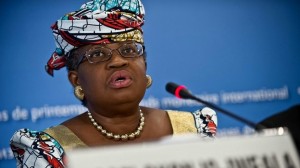 Finance Minister Ngozi Okonjo-Iweala says “nobody but us Nigerians” can stop the corruption[/caption] “I don’t think my reputation is under threat and to imply otherwise is distinctly wrong. I know what I’m doing. I know why I’m here,” she told me. “It would be very easy for me to sit at the World Bank and earn a nice salary and criticise. I gave up a comfortable career to come here and do my bit because I recognise that nobody but us Nigerians can clean it up.” “We need to be here fighting it ourselves, so that is what we are doing and we have a track record,” the finance minister said. She added that the pension system had been reformed following fraud there and a biometric system was being put in place to clean up the civil service and eliminate fraud via ghost workers. This latest oil corruption scandal has led to some Nigerians saying enough is enough. Social media has been abuzz with cries of: “Where is our 20 billion?” A few dozen men and women have been arranging to meet to strategise on how they can help push for answers and accountability. “OK, so I’m buying kerosene for 130 naira and [in reality] there is no subsidy – it’s cool with me,” says social commentator Babatunde Rosanwo. “But the fact that you get to find out that someone is actually taking money on your behalf for what you are not benefitting from – it is just like somebody collecting social benefits in the name of the citizens. “It’s a foolery that somebody sits somewhere and is taking a chunk of the treasury in our names. That is the message the citizens need to get this time around.” A glimmer of hope? Past reports of gross plunder in the oil sector have been buried with little action taken, leaving many Nigerians with the belief that those implicated are too powerful to touch. So why would it be different this time around? [caption id="attachment_8857" align="alignright" width="300"] 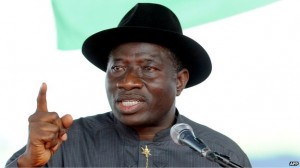 President Jonathan has positioned himself as being tough on corruption, but Nigerians are not convinced[/caption] Lagos-based banker Akintunde Oyebode notes that the governing People’s Democratic Party no longer dominates Nigeria politics and faces a credible challenger in next year’s elections, while voters are becoming “more sophisticated”. “I wouldn’t like to be the party that promises oil sector reforms and doesn’t deliver because in four years that party will be out of government.” It is a glimmer of hope that the thieves’ days may be numbered. *Source BBC]]>