Secret emails reveal an intense lobbying campaign behind Tony Blair’s plan to appear alongside Barack Obama, as his charity wins £3m US aid deal   By Matthew Holehouse, and Edward Malnick*

Tony Blair is celebrating another multi-million pound contract after his charity secured a key deal with the US government.
[caption id="attachment_8988" align="alignleft" width="300"] 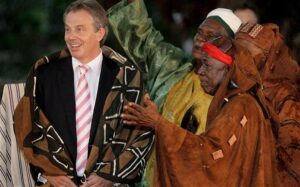 Tony Blair (L) wears a ceremonial robe after being made an Honorary Paramount Chief of Mahera Village on 30 May 2007 near Freetown, Sierra Leone. His charity has been given £3m for aid work in Africa by the US Government. Photo: EPA[/caption] This time, the former prime minister’s Africa Governance Initiative (AGI) has won a £3.3 million contract to play a key role in Barack Obama’s flagship African aid programme.
The three-year deal – with the US Agency for International Development (USAID) – gives Mr Blair’s charity an important role in the initiative, called Power Africa. The money represents more than AGI’s combined total income in 2012, the most recent set of accounts available.
It comes after a sustained lobbying campaign by Mr Blair’s aides, which began at least seven months before formal bids for the contract were opened last November.
It is thought to be the third grant obtained by Mr Blair’s charity from USAID. The body was, until last February, overseen by Hillary Clinton, who, along with her husband Bill, the former US president, is a close friend of Mr Blair and his wife, Cherie. Documents obtained by this newspaper show how persistent approaches by AGI staff included asking US officials for help arranging meetings with African heads of state as well as requesting internal briefings and even assistance in obtaining entry to the World Economic Forum. The cache of 600 pages of correspondence offers a glimpse into how Mr Blair has gained access to foreign leaders around the world, and reveals how senior staff at Mr Blair’s charity repeatedly suggested that he could attend the launch of Power Africa alongside Mr Obama last summer. The president’s scheme, worth $7 billion (£4.2 billion) in total, brings together US energy giants and is designed to bring electricity to 20 million Africans in six countries including Ethiopia, Ghana and Tanzania. In November 2013 USAID formally invited bids for a contract to lead the scheme’s “senior advisors group”, a role that will involve working with African heads of state in three countries to help implement large-scale reforms to their power sectors. The documents obtained by The Telegraph however, show how AGI staff were lobbying USAID officials for a role in the programme as early as April last year. In a group email dated April 22, Andrew Herscowitz, now the Power Africa coordinator, introduced colleagues to Dr Malte Gerhold, then a senior AGI adviser. “We are engaged in negotiations with his organization (AGI) to take the lead on the “Advisor’s group” piece of Power Africa,” he said. The emails also show that Mr Blair’s work had won the support of Raj Shah, the head of USAID, and the two men held several discussions about AGI’s work in Africa. In an internal memo one official wrote: “Supporting TB is a priority (admittedly among many) for Raj”. In the eight weeks leading up to the launch of Power Africa last summer, AGI staff repeatedly emailed USAID seeking involvement in the scheme. On May 14 Dr Gerhold said he would like AGI “to visit 2-3 Power Africa countries before the launch in June”. He continued: “Raj Shah and Mr Blair discussed this in their phone call today, and it will be important for AGI to establish relationships with relevant governments and understand what specific delivery support the respective government needs, and wants.” In one email, Dr Gerhold asked USAID officials if he, Mr Ratcliffe and Mr Blair could take part in meetings between African leaders and Dr Shah at the World Economic Forum summit in Cape Town. He noted that President Kikwete of Tanzania and Prime Minister Hailemariam of Ethopia would be at the gathering, and asked if the leaders of Kenya, Nigeria and Ghana were attending. He added: “I understand that access to the WEF can be difficult, so would USAID be able to help facilitate this?” Mr Herscowitz replied that Dr Shah would welcome Mr Blair’s participation in some of the Power Africa meetings and later explained that he too would be unlikely to have access to the venue. [caption id="attachment_8989" align="alignright" width="300"] 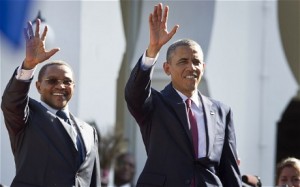 Barack Obama, right, and Tanzanian President Jakaya Kikwete in Dar es Salaam, Tanzania. Tony Blair’s staff sought a meeting with Mr Kikwete at the World Economic Forum.[/caption] In a later message, Dr Gerhold asked US officials for copies of internal briefings on Power Africa. However a USAID official replied: “I have unfortunately been informed that we cannot share internal materials right now.” The extent of AGI’s preparations for the Power Africa launch appear to have taken US officials by surprise. In mid-May, when Dr Gerhold said he was planning trips to Power Africa countries to “establish relationships”, Mr Herscowitz urged him not to incur expenses at that stage nor to “get too far ahead” until USAID had drawn up more detailed plans. The emails also reveal that US Congressmen privately raised questions about Mr Blair’s work. USAID had a year earlier given £500,000 to AGI to fund his governance programme in Sierra Leone. In an email dated May 22, Dr Gerhold asked Mr Herscowitz: “Is it possible to know who asked the congressional question about AGI? Understood if not!” The reply came: “Generally we don’t share that kind of information.” A USAID spokesman said: “The agreement was awarded through a full and open competition.” A spokesman for Mr Blair said: “You have no evidence of wrong doing because there is none – when it was decided there would be a competitive tender process for funding, AGI applied, went through exactly the same process as any other organisation and was successful.” The latest accounts for a network of companies used to run Mr Blair’s business activities showed that he had more than £13 million deposited in the bank. His wealth is estimated at £70 million. *Source Telegraph UK
]]>