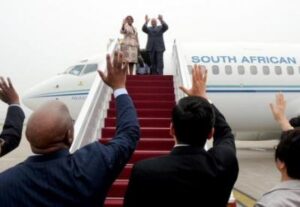 South Africa’s president arrives in Beijing for a Ministerial Conference of the Forum on China-Africa Cooperation (FOCAC). Photograph by GovernmentZA.[/caption] In 2007, when two Chinese state-owned companies struck a deal with the Congolese government to build the biggest mine the country had ever seen, all involved were riding high. In a mega-deal originally worth some $9 billion, Sinohydro and the China Railway Engineering Corporation (CREC) would gain access to 6.8 million metric tons of copper, the future profits of which were to underwrite the prior building of hospitals, roads and other infrastructure. At the time, China’s involvement in Africa was booming and the Sicomines deal embodied much that was symptomatic of Sino-African relations: it was massive-scale, involved vast infrastructural construction linked with similarly vast mineral resources, and was taking place in a country many other investors would have deemed too unstable. It was not long, however, before confidence in the deal began to wane, especially amongst the deal’s financers, China’s Export-Import Bank (Exim). To begin with, the Congolese government insisted that its own mining parastatal Gécamines receive a stake equal to that of each of the two Chinese companies. This would greatly amplify Congo’s eventual earnings from the copper and begin generating revenue for the state earlier in the process. The Chinese negotiators conceded and Gécamines was awarded a 32% stake in the deal to the Chinese companies’ 68%. The Chinese partners would now be forced to cooperate with an unfamiliar and notoriously unruly partner in a country whose mineral-rich east remains largely ungoverned and prone to conflict. This move is likely to have dismayed Exim bank officials. “Generally when a major supplier to the project is Chinese, the core mission of the banks is to support China ‘going global,’” explains Kai Xue, a Beijing attorney who assists Chinese banks investing in projects in Congo and Zambia. “Not only should the Chinese company have partial ownership over these resources, but it should be in control. If the stake of foreign parities is too great, then the project may even be somewhat of a failure from the point of the bank because it does not support that mission.” In October 2009, China’s unease over the deal was further magnified as the Congolese government gave in to pressure from the International Monetary Fund (IMF) and removed its loan guarantee to China’s Exim Bank. Kinshasa recanted on its assurance that it would reimburse the bank if profits from the mine were not sufficient to repay the loan, and overnight China’s already high-risk bet had become an uninsured gamble. The IMF also persuaded the Congolese government to reduce the scope of the deal from $9 billion to its current $6 billion by halving the amount to be loaned by Exim bank for infrastructure. “What [Exim bank] didn’t anticipate is to what extent other parties such as the IMF would meddle in their settled deal,” says Kai. What’s more, he explains in a recent article, “African governments are becoming more assertive, and more frequently reviewing contracts – especially in countries emerging from conflict.” Exim’s concerns seemed to come to a head in early 2012 when the bank pulled its loans altogether, putting the entire project in jeopardy. Presumably officials were alarmed by the rising risk of the project due to the lack of a guarantee. By this time, the bank had already extended nearly $1 billion worth of loans, and Sinohydro and CREC were left scrambling to find an alternate financer for the project. “While China’s banks are cautious, the real risk-takers in the context of the Sicomines agreement are the Chinese companies,” wrote researcher Johanna Jansson.

In the end, China’s Exim bank performed another U-turn and had resumed its loans by early 2013. But it seems the extreme risks of investing in the Congo that have long dampened the enthusiasm of Western investors are now worrying Chinese ones too. And the DRC is not the only place where China is wavering. Last month, officials from the Chinese Development Bank arrived in Ghana to re-negotiate a $3 billion oil-backed infrastructure deal. Although the results of the talks haven’t been made public, the Chinese bank’s primary demand was reportedly to negotiate an extra 2,000 barrels per day than previously agreed. The bank is understood to have already paid out $600 million, but is keen to strengthen guarantees that its loan is paid back in what appears to be an increasingly risky arrangement. Meanwhile in Gabon, the China National Machinery Equipment Import and Export Company (CMEC) has been grappling with officials for years over a multi-billion dollar deal regarding an iron ore mine in the country’s northern mountains. A contract was originally signed in 2006, but since then progress has been stymied by the death of the president who signed the deal, commodity price volatility and civil society dissent. Gabon’s new president called for a review of the deal when he came to power in 2009 and in February 2012, the government announced it was awarding the mining project instead to Australia’s BHP Billiton. A tardy declaration last year by Gabonese officials that talks with CMEC are nevertheless still ongoing is unconvincing. “The negative consequence” of disappointments like these, said Kai, “is deterrence against expansion of investment at the pace we have been accustomed to in this golden era of Sino-African investment.” While Chinese companies were once seen as fearless pioneers compared to their Western counterparts, recent setbacks may well be teaching them lessons in restraint that other investors had learnt before them. They may be learning that political support − in both China and Africa − for ambitious mega-deals can fade over the course of time it takes for the agreement to run its course. They may be learning that although partnerships with rogue African state mining companies are often unavoidable, they must be undertaken with extreme wariness. And they are certainly learning that any investment that burdens an already-indebted African nation with billions of dollars in new loans is likely to be met with opposition from Western lenders like the IMF, which expect to be repaid first. There are signs Chinese officials have already taken some of them to heart. For example, Exim officials disappointed their Congolese partners last year when they refused to furnish a much-anticipated $200 million investment in Congo’s state mining company to finance a separate copper mine and energy project. Exim officials, it seems, are hesitant to invest further in the Congo after their signature deal there nearly went awry. According to Kai, this may be part of a new trend. “China-Africa relations may be near a high point and will decline in priority within a decade,” he predicted. “This does not mean that relations will sour, nor that there will be a collapse in activity, but rather that there will be a slowdown in growth and a scaling back in importance.” *Source Think Africa Press]]>