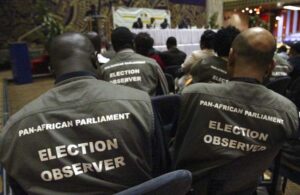 The Peace and Security Council of the African Union (AU), at its 424th meeting held on 12 March 2014, was briefed by the Department of Political Affairs of the African Union Commission on elections in Africa during the first quarter of 2014. The briefing focused on upcoming national elections in Guinea Bissau, Algeria, Malawi and South Africa. Council commended the Department of Political Affairs for its comprehensive report on upcoming national elections in Africa during the first quarter of 2014 and requested the Department to submit to it a list of national elections to be conducted in AU Member States during 2014. Council further listened to the statements made by the representatives of Algeria, Malawi and South Africa on the state of preparations of the upcoming elections in their respective countries. In this regard, Council commended these countries for the efforts they are making to ensure smooth conduct of their elections. Council requested the Department of Political Affairs to make quarterly briefings on national elections in Africa to the PSC as part of AU efforts towards conflict prevention on the continent. Council encouraged the Commission to deploy both long-term and short term election observer missions in countries holding elections and to mobilize necessary resources to this end. *SOURCE African Union Commission (AUC)/APO]]>