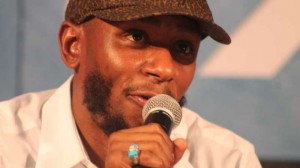 Mos Def[/caption] Mos Def says he came to live in Cape Town to spend some time to sort out his life and because the city and South Africa is “crazy”. “Where’s your skirt from?” was perhaps not the most appropriate way of asking Yasiin Bey, aka Mos Def, about his attire on our first encounter. But he was humble in his reply: “It’s a wrap from Ghana.” The New York hip-hop star and Hollywood actor has made Cape Town his home since last May. The 40-year-old star says the wrap is “what I’m comfortable in at home”. He says of his new home in Cape Town: “I’m here for middle class comfort.” “Last year May, I came [to Cape Town] and I said I’m not leaving. I’m staying. It’s a beautiful place. It has the ocean, mountain, botanical gardens and beautiful people,” says Bey. This has not stopped him from making music and staying involved in the music business. Bey is working on various projects, including a tribute album to legendary spoken-word performer Gil Scott Heron. Bey was also the keynote speaker at the Music Exchange conference at the City Hall on Friday morning. This event gathers top names in music, film and entertainment to talk shop for two days. His relationship with Cape Town started almost four years ago. “I came to Cape Town in 2009 and I was like, ‘Yeah’. I know when the good vibe gets to you. I thought about this place every day when I left. People were like, ‘You’re crazy. It’s light years away. They’re crazy. They’re going to eat you. You shouldn’t go there. I said, ‘I’m going’.” Bey says he left America to spend some time sorting out his life. “Man, I’m going to tell you something. For a guy like me, with five or six generations from the same town in America, to leave America, things gotta be not so good with America,” says Bey. “There are some beautiful places in America. I love Brooklyn. New York City needs to thank Brooklyn every day just for existing. That’s how I feel about it. It was a hard thing to leave home. But I’m glad I did.” He sums up Cape Town and South Africa in one word: “crazy”. “I got the vibes to be here and now I’m here. It’s amazing and it’s crazy. South Africa is crazy. Cape Town is crazy. I’ve seen some of the craziest people in my life walk down Long Street. And I’m from New York,” says Bey. “These fights, they’re crazy. These guys with the vests, helping me park [my car], they’re crazy. Angry face people … crazy. People complaining about nothing, crazy. But worthwhile. Not always easy but more beautiful than a lot of places I have been to.” He adds: “The determination of people that I see in this city and country … writers, graphic designers, painters, so many fantastic people. Yet I see the same people, many of them doubtful or fearful or feeling that what they have to offer is beautiful only to them but that it is not valuable to the world.” Bey places Africa on a pedestal in his mind when he speaks of the continent.”I’ve been some places … some of the best places in Europe and the US. Amazing talents and amazing places. But no place is like Africa. No place,” he says. “The arts, the crafts, the energy, the people coming out of this continent, are like no other in the world. Be aware that you are in a special place at a very special and unique time in history. “Be encouraged. Yes, it is crazy, but that’s okay. Hope has never been and will never be lost.” It seems fitting though that the “shy kid” who became a rap star wears a wrap from Ghana. He is perhaps back at that stage when he was a teenager, trying to find his voice. “I was finding my voice as an MC. You had to have certain themes and voices. I tried other people’s voices. I started mimicking voices but none of them were as clear as mine,” he says of his teenage years. “When I left all of that and started singing what I really felt in a way that was specific to me, then I was understood. More than by others, but by myself. I started to find joy in that.” Bey went from being a “shy kid” and “nerd” to rhyme his way into popularity and wealth. He says: “I love hip-hop.” “I love its vitality and the way it speaks to young people. The way it spoke to me,” he says. “It told me don’t cry, don’t despair. I got something for you to do with all the despair, anger and sadness inside of you. I got a way for you to turn that around.” *Source M & G ]]>