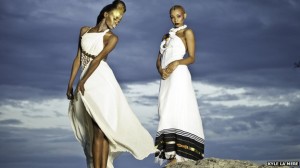 Ethiopian fashion designer Fikirte Addis kneels down and wraps a tape measure around the waist of a customer, before scribbling on a piece of paper on which the outline of a flowing gown takes shape.

The customer, Rihana Aman, owns a cafe in the capital, Addis Ababa, and went to Ms Fikirte’s shop in the city, Yefikir Design, for a wedding dress fitting. The dress, however, is actually for her sister, who lives and works in London, but will soon return to her homeland with her English fiance. Ms Rihana explains how she shares her sister’s figure, and that the cotton dress will be ready for when her sister arrives back for her “melse”, the Ethiopian wedding ceremony.

“I love the traditional aspect of the clothing,” Ms Rihana says of why she chose Yefikir. “So many dresses now are too modern, and use fabrics that lose what it means to be Ethiopian.”

Along with other designers, Ms Fikirte is drawing on Ethiopia’s rich cultural heritage while adding a modern twist to find success in the fashion industry at home – and increasingly abroad. As a result, fashion design is proving to be one of the most successful Ethiopian sectors for small business and entrepreneurs, generating profit margins ranging from 50% to more than 100%. Rich heritage Companies such as Yefikir have flourished in Ethiopia due to the absence of big chain department stores, and relatively low start-up costs, set against the high prices individuals are willing to pay for quality, traditionally made fashion garments. All Yefikir designs are made by hand on weaving machines operated using techniques that go back centuries. Flashes of colour come from strips of tilet and tilf – intricately woven or hand-embroidered multi-coloured patterns – which skirt hems, go around waists or course down backs. It took Musie Teamrat, a 27-year-old embroider, 10 days to make three tilfs for one Yefikir dress. As a result of such painstaking work, Yefikir’s custom-made dresses can sell for up to 15,300 birr ($850; £530), a sizeable sum, especially in a country where many toil for no more than 50 birr a day. Despite such apparent inequities, many Ethiopians – especially those in its growing middle class – are happy to pay handsomely for tailored garments with traditional influences, says 25-year-old fashion designer Mahlet Afework. [caption id="attachment_8955" align="alignright" width="300"] 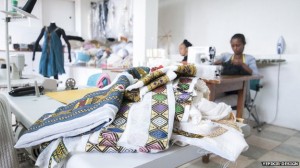 Mahlet Afework’s Mafi label specialises in modern designs from traditional materials[/caption] She adds that Ethiopians take great pride in the country’s ethnic diversity – about 84 languages and 200 dialects are spoken – and in displaying allegiances through clothing at special events such as weddings and festivals. Her clothing line, Mafi, specialises in ready-to-wear garments offering a notably funky take on the country’s ethnic melting pot, and one that has proved successful. In 2012 Ms Mahlet won the Origin Africa Design Award, and showcased her work at African Fashion Week New York. Home-spun skills Ethiopia’s successful fashion designers are predominantly women who grew up surrounded by traditionally woven cotton fabrics, and did not need to be taught the tailoring and embroidering skills required to make beautiful and delicate clothing. At the same time, a lack of formal fashion design education is preventing many Ethiopian designers from breaking out internationally, says Ms Mahlet, who is self-taught, and credits Google Search as her primary tutor. She adds that those few Ethiopian institutions teaching fashion design run courses that are far shorter than the typical three-year fashion degrees taught in the West, and need to better impart the skills needed to compete internationally.

Another problem in the international arena is conducting sales transactions.

Banking restrictions mean there are no foreign banks in Ethiopia, and international customers are often suspicious of paying into African accounts, Ms Fikirte says. Yefikir currently sells through Africa Design Hub, a US-based online store founded in 2013 by Western expatriates to showcase African designs while bridging markets. Elizabeth Brown, the store’s co-founder, says: “After living in East Africa for several years we saw the potential of African designs in the global market, but also a gap in market linkages, and knowledge sharing, between the industry and global consumers.” International arena Yet global interest in Ethiopia’s fashion scene is undoubtedly growing. “Ethiopia has some wonderful and interesting craftsmanship,” says Markus Lupfer, a British fashion designer who since 2010 has mentored young Ethiopian fashion designers in developing collections. He adds that growing international recognition for Ethiopia’s designers is partly a result of increasing demand for ethically produced fashion designs. Although for the majority of Ethiopia’s fashion designers, there is not yet enough of that recognition. 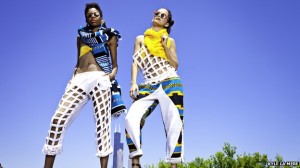 And while local demand remains buoyant – this year Ms Mahlet plans to open in-store Mafi fashion concession areas in Addis-Ababa-based boutiques; common practice in the West, but a new concept in Ethiopia – designers agree that international demand is essential for significant business growth. Ms Fikirte and Ms Mahlet plan to bolster their companies’ online presences this year, with both sharing a goal of exporting their designs to overseas boutiques and online stores. “Ethiopia’s fashion industry is changing the image of Ethiopia,” Ms Fikirte says. “It is showing the diversity and beauty of Ethiopian culture, and providing some of the world’s best hand-woven cotton fabrics.”   *Source BBC]]>