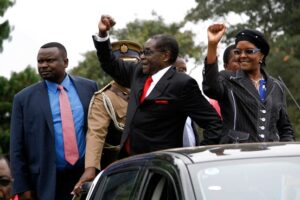 Zimbabwe President Robert Mugabe, center, and his wife, Grace, celebrated his 90th birthday in February. European Pressphoto Agency[/caption] Angolan President José Eduardo dos Santos traveled to Spain late last year to treat a toothache. Or maybe it was prostate cancer. In November, Maka Angola, a website run by investigative journalist Rafael Marques de Morais, reported that the 71-year-old president had collapsed in Luanda because of complications related to an enlarged prostate. Mr. Marques, who said he got the news from sources within the presidency, said Mr. dos Santos spent 30 days under observation at a Barcelona clinic, causing him to miss Angola’s Nov. 11 Independence Day for the first time in office. Mr. dos Santos’s son-in-law, Sindika Dokolo, who often acts as the family spokesman, countered that the president had merely gone to see a dentist in Spain, according to a November interview he gave to Sol, a Lisbon-based weekly newspaper. The Angolan government didn’t respond to requests for comment. Mr. Marques, who stands by his story, said such secrecy is typical of an Angolan leader who has held power for nearly 35 years, second-longest among Africa’s heads of state. But it is hardly in keeping with democratic trends on the continent of more open and accountable governments, he said “Angolans who voted him into power have a right to know where he is and why he is not in the country,” he wrote on Maka Angola. Ailing African leaders have long jetted out of their countries, and sometimes died overseas, without people back home knowing how sick they really were Yet keeping a president’s health a state secret is tougher these days—thanks to enterprising local journalists, pervasive social media and aggressive political opponents. Questions about the health of African presidents reflect a fundamental tension on the continent. A younger population—Africa’s average age is about 19—expects its aging leaders to be as open about their lives as they themselves typically are. “The older generation may not mind being kept in the dark. The younger generation doesn’t understand that all,” said Paul-Simon Handy, director of research at the Institute for Security Studies in Pretoria. “They live in the information era—where everything should be known and shared.” Trouble is, bad information is also shared. In January, reports surfaced that Zimbabwe President Robert Mugabe had collapsed, one of countless times he was said to be dying or already dead. His spokesman, George Charamba, said Mr. Mugabe was on regularly scheduled leave in Singapore having his eyes examined and he returned again in February for a cataract procedure. The Zimbabwean president was back home in time to celebrate his 90th birthday. “It’s actually one of the easier parts of my job,” said Mr. Charamba, referring to how he regularly denies the president is dying of prostate cancer. “The first thing to do is to indicate where the president is. Then we wait to produce the president.” Until a few years ago, African presidents could largely control the trickle of information through state media. In 1990, Ivory Coast’s then 85-year-old leader Félix Houphouët-Boigny won a seventh term, despite being virtually absent on the campaign trail. Instead, state media ran archival footage of him. Three years after his landslide re-election, Mr. Houphouët-Boigny died of prostate cancer. Nowadays, mobile phones and bare-knuckle politics make it more difficult to disappear from public view. After January’s African Union summit in Ethiopia, Zambian President Michael Sata fanned speculation about his health when said he was going on vacation but didn’t say where. An opposition leader, Hakainde Hichilema, speculated Mr. Sata was in India for medical reasons and urged Zambians to pray for him. President Sata then surfaced in London, where his office fired off a furious statement calling Mr. Hichilema “a frightened little man” who “wants to disguise his leadership failures through reckless, alarming and abdominal utterances over the president’s health.” Mr. Sata then cut short his holiday and returned to Zambia. His spokesman didn’t respond to phone calls and emails seeking comment. Mr. Hichilema’s spokesman said Zambian taxpayers “are at liberty to find out matters regarding their president, including health and holiday matters.” African governments rarely shed much light on furtive visits to foreign doctors. In 2010, Nigerian President Umaru Musa Yar’Adua died after spending months at a Saudi Arabian hospital, during which time aides dodged questions about the 58-year old leader. In 2012, Malawi’s government flatly denied social-media reports that President Bingu wa Mutharika had died of a heart attack. Some officials said he had been flown to South Africa for further treatment. Two days later, they confirmed he had died of a heart attack. Algeria’s president, Abdelaziz Bouteflika, recently said he would seek a fourth term in office. The 77-year-old leader spent more than two months in a Paris hospital last year after suffering a stroke. The Maka Angola website noted some truth in Mr. dos Santos seeing a dentist in Spain. Between June and August, the Angolan president spent more than 40 days outside the country related to tooth implants that led to facial swelling, it reported. Following the trip to Spain, Mr. dos Santos has kept a low profile. In December, he skipped memorials in South Africa for former President Nelson Mandela. The president was pictured at a charity gala in Angola where pop diva Mariah Carey performed. But then in January, he didn’t show at the AU summit, de rigueur for hobnobbing among diplomats and the continent’s heads of state. Mr. Marques is no longer buying talk of the toothache. “If our country is doing as well as he always says it is,” the journalist ventured, “you would think he’d be able to find a decent dentist in Angola.” *Source WSJ]]>