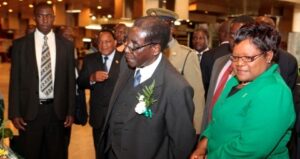 The succession debate drags on as Mugabe seeks to replace John Nkomo. President Robert Mugabe won a fresh five-year mandate to extend his 33-year rule in last year’s national elections but his poor health, old age, questions surrounding his legitimacy and internal party squabbles have heightened debate on the succession. Mugabe, who turns 90 on 21 February this year, has made numerous medical visits to Asia, but his health condition remains a closely guarded secret. Vice-president Joice Mujuru, whose faction in the ruling Zimbabwe African National Union-Patriotic Front (ZANU-PF) now controls a number of key ministries and parliamentary constituencies, is tipped to succeed the veteran leader. Justice minister Emmerson Mnangagwa heads a rival faction. In terms of the new constitution, if the president becomes incapacitated the president’s party will name someone to complete his term. In terms of the ZANU-PF hierarchy, Mujuru becomes the likely candidate to take over, as she is the second in command. A younger group calling itself Generation 40 is said to have aligned itself with the Mujuru faction, dealing a blow to the Mnangagwa camp. Generation 40, according to a political insider who requested anonymity, has no capacity to lead ZANU-PF at the moment because “the old guard is blocking all attempts to inject new blood in the party.” With party chairman and Mujuru ally Simon Khaya Moyo tipped to take over as second vice-president to replace John Nkomo, who died last year, Mnangagwa appears more isolated than ever. But the ZANU-PF rank and file is sharply divided following reports that Mugabe is courting former home affairs minister Dumiso Dabengwa, who broke away from the party to revive the Zimbabwe African People’s Union (ZAPU). Some Khaya Moyo loyalists are blocking that move. Dabengwa, an intelligence supremo, poured cold water on the reports, saying: “I have not spoken to Mugabe in a very long time.” Some top party officials claim the issue of Nkomo’s replacement is now overshadowing the Mugabe succession debate. “It is no surprise that [Joice] Mujuru will take over from Mugabe because the new kingmaker in our party after Solomon Mujuru’s mysterious death is Didymus Mutasa [secretary for administration], who is in the Mujuru faction and also one of those few people trusted by the president. But we have to deal with the issue of Nkomo’s replacement first because that is what is urgent,” says a ZANU-PF politburo member who asked not to be named. Sensitive issue Others within the party say that the leadership deliberately avoided the succession issue at the party’s annual conference in December 2013 because the issue is a sensitive one. The conference, says the source, also resolved to delay elevating Khaya Moyo to the vice-presidency in order to “keep the party intact because the party was becoming divided over who would succeed him as chairman and that would also have had a bearing on the president’s succession question”. Many in the party believe Mugabe has not yet decided who should succeed him while others ac- cuse him of using a divide-and-rule tactic. ZANU-PF spokesperson Rugare Gumbo says the succession issue does not exist in his party’s politics: “There is no vacancy, the president is still there and very energetic to lead the party. So why should we preoccupy ourselves with his succession instead of focusing on delivering what we promised people during the elections?” ● *Read the original article on Theafricareport.com :  Follow Africa Report: @theafricareport on Twitter | theafricareport on Facebook]]>