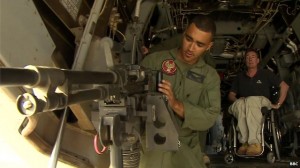 The US is dramatically increasing the tempo of its military operations in the Horn of Africa in an effort to counter violent extremism, in the wake of last year’s Westgate attack in Nairobi.

Missile strikes by US drones against al-Shabab and al-Qaeda leaders are “vital” and will continue, according to the government of Djibouti, from where the controversial drone strikes are launched. Washington has been building up a large military base in Djibouti and training regional armies to fight al-Shabab in Somalia. ‘Complex problem’

Beneath a blazing sun, gunmetal grey helicopters line the runway at this former French Foreign Legion base, now leased by Washington from the government of Djibouti.

The helicopters and rows of other US aircraft are equipped for long-range missions, some covert, some more conventional. The Pentagon’s recently created East Africa Response Force (EARF) is here. Its soldiers flew at short notice to South Sudan in December to protect the US embassy and its staff, a lesson learnt from the catastrophic attack on the poorly defended US consulate in Benghazi. The US taskforce here, under the catchy title of “Combined Joint Task Force Horn of Africa,” or CJTF-HOA, was set up nearly 12 years ago Back then, Washington’s aim was to stop al-Qaeda operatives from migrating westwards from Pakistan into East Africa, by interdictions and showing nations in the region how to improve their security. This week I put it to the Task Force Commander, US Brigadier-General Wayne Grigsby, that while that migration may have been checked, the Horn of Africa region is hardly a success story when it comes to security. Al-Shabab in Somalia have become proficient in laying roadside bombs and have launched attacks beyond their borders in Kenya and Uganda, while al-Qaeda in Yemen has three times succeeded in getting explosive devices on board international flights. All this, while CJTF-HOA was doubling in size. “It’s a complex problem,” admits Gen Grigsby, who only assumed command this year. But he says the Pentagon’s aim is to get others in the region to take on the burden of defeating al-Shabab. “Our mission here is to enable our East African partners to actually neutralise violent extremists throughout eastern Africa.
[caption id="attachment_8478" align="alignright" width="300"] 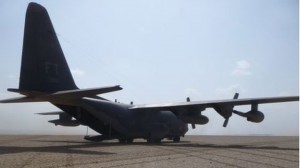 As well as the US, France, Germany, Italy and Japan all have a military presence in Djibouti[/caption] “It also enables strategic access and freedom of movement. The purpose is to protect the United States and its interests abroad.”
‘Garrison town’ Djibouti, an impoverished former French colony, has close links to the region’s two most troubled nations, Yemen and Somalia, where US boots on the ground would not be popular. But Djibouti has decided to throw in its lot with Washington and the West, becoming effectively the region’s garrison town. The French still maintain a major base here with over 2,000 servicemen and women, their Mirage fighter jets thundering down the runway shared with the civilian international airport. The Germans, Italians and Japanese are all here, conducting counter-piracy operations in the Gulf of Aden and beyond. But the biggest presence by far is American – there are more than 4,000 people on the base at Camp Lemonnier. Housed in a compound within a compound are hundreds of highly secretive Special Forces operatives from JSOC – US Joint Special Operations Command. They bypass normal camp authority, taking their orders direct from their own command in Florida.
Huge men with beards and steely expressions, they keep to themselves, often deploying at night. Their primary target is the command leadership of al-Shabab across the border in Somalia. Since four gunmen from that group killed more than 60 shoppers in Nairobi’s Westgate mall in September, Washington has injected a new urgency into its hunt to track down the leaders before they can plan more attacks. Drone strikes One controversial tool in JSOC’s arsenal is the use of missile strikes by unmanned Reaper drones. Until last September they took off from this base but after a number of crashes and near misses the Djibouti government asked the Americans to move them out to a desert runway.

So I asked Djibouti’s Foreign Minister, Mahmoud Ali Youssuf if this bothered him.
“We feel that really Djibouti is one of the top targets of al-Shabab in the region,” he replied, adding that: “These people are very dangerous, the al-Shabab and al-Qaeda elements. So whatever it takes. 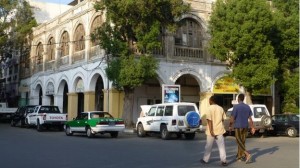 “If we can contain them, ok, if we can get rid of them it’s better. “But we don’t have to waste time in asking each and every time ourselves if we should use drones or not”. It certainly looks like America is here to stay. Fresh building work is still under way at the camp. So as long as this remains a troubled region and Djibouti is happy to play host, Washington has a firm foothold on the Horn of Africa. The drone strikes against militant leaders look set to continue. *Source BBC
]]>