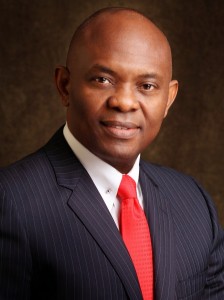 Transcorp Ughelli Power Ltd (TUPL), the power subsidiary of Transnational Corporation of Nigeria Plc (Transcorp), and General Electric (GE) have signed an agreement to expand the capacity of TUPL’s Ughelli power plant by1000MW over the next 3 to 5 years. Both parties have also signed a separate agreement to rehabilitate the damaged GT 15 turbine at the Ughelli plant, which will add 115MW to the plant’s output. Currently, the Transcorp Ughelli power plant generates 360MW of electricity, up from 160MW on November 1, when Transcorp took ownership of the plant. With the additional 115MW, as well as other rehabilitation works planned at the plant, output at Ughelli will increase to 700MW by December 2014. The Ughelli power plant is Nigeria’s largest gas-fired electricity generation asset.  Purchased by Transcorp during the 2013power privatization programme, the $300 million plant is part of the $2.5 billion investment pledge made by the Chairman of Transcorp and Heirs Holdings (http://www.heirsholdings.com), Tony O. Elumelu, CON, to deliver affordable, accessible power to Africa under the Power Africa Initiative. Heirs Holdings, Elumelu’s pan-African proprietary investment company, is Power Africa’s largest private sector investor and a major investor in Transcorp. The agreements were signed at a closed door meeting between executives of both companies, led by Elumelu and the Global Chairman of General Electric, Jeffrey Immelt. They follow a cooperation agreement executed by Transcorp and GE in 2013. Commenting, Elumelu said, “We are very pleased to work with GE, a proven world leader in power technology development, on the Ughelli plant expansion project.  With this, we’ve taken a bold step in fulfilling our promise to Transcorp’s stakeholders and the people of Nigeria. In a very short period of time, we have achieved significant impact – power production has more than doubled, and with this agreement, we will see increased output before the end of this year. We are confident that this partnership with GE will further accelerate the achievement of our goals in the power sector.” Immelt said,” GE fully appreciates the confidence expressed by Transcorp. We are happy to bring the considerable resources of GE to support Transcorp’s audacious vision for Nigeria’s Power industry. This partnership with Transcorp underlines GE’s deep commitment to developing the Nigerian power sector.” A publicly listed conglomerate with strategic investments in the power, hospitality, business and energy sectors, Transcorp, through TUPL, is committed to transform and bring the plant to profitability by increasing its generating capacity to impact positively on the socio-economic development of Nigeria. GE, one of the world’s most reputable companies is the global leader in the design, manufacture, supply, installation and maintenance of technology and services for the Power, Aviation, Oil & Gas, Healthcare and Transportation sectors. About Transcorp Transnational Corporation of Nigeria Plc (Transcorp) is a publicly quoted conglomerate with a diversified shareholder base of over 300,000 investors, the most prominent of which is Heirs Holdings Limited, a pan-African proprietary investment company. The Transcorp portfolio comprises strategic investments in the power, hospitality, agribusiness and energy sectors. Our notable businesses include Transcorp Hilton Hotel, Abuja; Transcorp Hotels, Calabar; Teragro Commodities Limited, operator of Teragro Benfruit plant – Nigeria’s first-of-its-kind juice concentrate plant; Transcorp Ughelli Power Limited and Transcorp Energy Limited, operator of OPL 281. For more information about Transcorp, please visithttp://www.transcorpnigeria.com About Heirs Holdings Limited Heirs Holdings (http://www.heirsholdings.com) is a pan-African proprietary investment company driving Africa’s development. We are active long-term investors who specialise in building businesses and corporate turnaround. We aim to transform the companies in which we invest and grow them into businesses that last. We invest in Africa to create value for our shareholders and partners, and to create economic prosperity and social wealth for the continent.  Our investments in power, financial services, oil and gas, real estate and hospitality, agri-business and healthcare are helping to build economies, create jobs, drive prosperity and ultimately transform the lives of ordinary Africans in Africa. For more information about Heirs Heirs Holdings, please visithttp://www.heirsholdings.com About GE GE (NYSE: GE) works on things that matter, using the best people and the best technologies taking on the toughest challenges, finding solutions in energy, health and home, transport and finance, building, powering, moving and curing the world. Not just imagining. Doing. GE works. For more information, visit the company’s website at http://www.ge.com. SOURCE Heirs Holdings/APO]]>