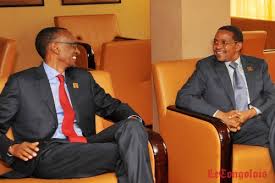 Ubalozi wa Tanzania katika Rwanda usiku wa jana, Jumatano,Januari 29,2014 ulitoa taarifa kwa vyombo vya habari ikikanusha habari za uongo na uzushi ambazo ziliandikwa mwishoni mwa wiki nagazeti la Serikali ya Rwanda la News of Rwanda.Ifuatayo ni taarifa kamili iliyotolewa na Kaimu Balozi wa Tanzanianchini Rwanda, Mheshimiwa Francis Mwaipaja:Imetolewa na:Kurugenzi ya Mawasiliano ya Rais,Ikulu.Dar es Salaam.30 Januari, 2014 STATEMENT ON CLAIMS BY THE NEWS OF RWANDA The Embassy of Tanzania in Rwanda is deeply saddened by malicious and untrue reports, published over the weekend by the Rwanda Government Owned Newspaper, The News of Rwanda, in which it accuses the President of the United Republic of Tanzania, HE Jakaya Mrisho Kikwete, of supporting and holding meetings with members of rebel groups opposed to the Government in Kigali. Indeed, these reports are nothing but a bunch of dangerous lies fabricated by editors of this publication with obvious malicious intent to attack the person of the President of a friendly neighbouring country and create an impression that Tanzania is working with enemies and groups opposed to the Government of Rwanda.The News of Rwanda, which has gained uneviable notoriety of reporting and publishing malicious, dangerous and perpetual propaganda, quoting unnamed sources claims, among other things, that two founding members of the Rwanda National Congress (RNC) including Dr. Theogene Rudasingwa met secretly in Dar es Salaam with top commanders of the Democratic Forces for Liberation of Rwanda (FDLR). Given the enormity and dangerous nature of these reports, the Embassy of Tanzania in Rwanda would like to make the following clarification: 1. That the so called founding members of Rwanda National Congress,Dr. Rudasingwa and adviser Condo Gervais together with top commanders of FDLR, namely Lt. Col Wilson Irategeka and Co lHamadi were not in Tanzania last week. Indeed, our records do not show that they have visited Tanzania in the recent years. 2. That, there was no meeting of any kind at any official residences of President Kikwete, either in Dar es Salaam or in Dodoma or anywhere. Indeed, President Kikwete has never met any of those people mentioned anywhere – in Tanzania or outside. Moreover, on the day that News of Rwanda claims that the meeting took place,Thursday 23rd, this month, the President was not even in the country – he was in Davos attending the meeting of the World Economic Forum (WEF). 3. That, the former Prime Minister of Rwanda Faustin Twagiramungu was also not in Tanzania on any or the same mission and did no tattend the meeting with representatives of RNC and FDLR as no meeting of such nature took place in Dar es Salaam or anywhere inTanzania as alleged by this paper. The Immigration Department in Tanzania does not have a record of such people entering or exiting the country. 4. That, The Tanzania Immigration Department has never issued any travel document to any Rwandan citizen including those claimed in the News of Rwanda that they travelled to Mozambique usingTanzanian passports on or around December 20th 2013. It is not the business of Tanzania to issue travel documents to citizens of other countries. 5. That it is also untrue that the so-called, “insider establishment” in Tanzania is providing the base for organization and facilitation for travel for FDLR fighters. It is open secret that there is no presence of even a single FDLR fighter in Tanzania. The News of Rwanda should know better where these fighters are based and operate from. As mentioned earlier, this report and other similar reports published in recent weeks by the News of Rwanda are not only untrue, baseless and mere fabrication but also dangerous and threatening to the excellent and sound diplomatic and social relations between our two neighbouring countries, both of which are members of the East African Community(EAC). President Kikwete is deeply hurt by these lies and his humble advice to the editors of this publication is to stop fabricating untrue claims which potentially could create and fuel animosity and confusion among the people of our two neighbouring and friendly countries. At a time when President Kikwete and President Paul Kagame of Rwanda had agreed in Kampala to foster friendly relations, such newspaper claims can only sour the atmosphere and President Kikwete would like to know what the editors of the publication are up to?The Embassy of Tanzania in Rwanda does not take lightly these allegations by the News of Rwanda given the position that this publication occupies in Rwanda.]]>