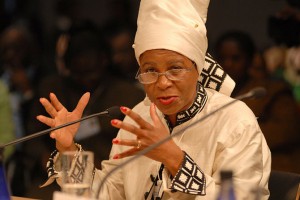 Dr. Mamphela Ramphele, South African businesswoman (Photo credit: Wikipedia)[/caption] She made the Forbes’ Africa’s Richest Women list back in 2011 as one of nine African women worth at least USD $50 million. With an impressive resume including a stint at the World Bank as Managing Director, Dr. Mamphela Ramphele, 66, announced yesterday her candidacy for the Presidential elections due in about four months in South Africa. Ramphele, aiming to become the country’s first female president, disclosed her personal wealth as 55million Rand (USD $5.5 million) last year. The national elections, likely to be held in April or May, have been described as fiercely contested in the two decades of the country’s democracy. The 2014 elections will also be the first since the recent passing of former president, Nelson Mandela. Invoking the memory of fellow activist, first democratically elected President and South Africa’s first Black President, Nelson Mandela, the celebrated anti-apartheid activist addressed reporters in a nationally televised press conference held at the Townhouse Hotel in Cape Town, South Africa; ‘The death of Nelson Mandela has changed many things for South Africa.” During the press conference, Mamphela, who is successful businesswoman and made millions as a senior mining industry executive said, “I am honored today to accept the invitation extended by the Democratic Alliance (DA) to stand as its presidential candidate for the 2014 elections. I believe this decision is in the best interests of South Africa as we head into turbulent waters.” Last year Ramphele launched her political party, Agang SA, which means “build South Africa” in the Sesotho language. However, the year-old party struggled to gain traction with citizens and connect with voters despite increasing disaffection with the ruling political party, the African National Congress (ANC) and with the current President Jacob Zuma. A merger with the main opposition party, the Democratic Alliance headed by Helen Zille, long rumored to be in the works was put to rest during the news conference. “It is with great pleasure and excitement that I can announce that Dr Mamphela Ramphele has accepted theDemocratic Alliance’s invitation to stand as our presidential candidate in the 2014 General Election. I can announce further that we are establishing a joint technical committee to manage the integration of the DA and Agang SA structures and volunteers.” said Zille in making the announcement. This will be first time that the DA, South Africa’s main opposition party, will field a Black candidate for the presidential elections. The political move, though bold, drew nationwide criticism with Gwede Mantashe, secretary general of the ANC, reacting to the announcement: “It’s a rent-a-leader and a rent-a-black-face.” The DA has long been viewed as a mostly white-only political party and Ramphele’s recent move to the DA is being regarded as a strategic move to attract the elusive “Black vote” to the opposition party. How successful this merger is, remains to be seen come presidential elections slated for later on this year. There are indicators that the DA has been chipping away at the ruling party’s supporter base.  The latest survey polled byIpsos Markinor showed the ANC’s national support dropping to 53%; the DA rising to 18%; former ANC youth leader Julius Malema‘s newly formed political party, Economic Freedom Fighters at 4% and Agang SA polling at 1%. Additionally, there has been widespread frustration towards the Zuma administration and the ANC, particularly at the alarming levels of unemployment and poverty, rampant corruption, and widening inequality in the country. For Zille and the DA, the merger with Ramphele and AgangSA “is a game-changing moment for South Africa.” For Ramphele, who once worked as a community doctor in the Eastern Cape alongside her life partner, the late Steve Biko with whom she had two children, the merger represents “the day that we begin anew to refresh the promise of 1994. We are the government-in-waiting, we are the representatives of millions of South Africans, who believe in the promise and potential of a multiparty democracy, in a state that respects all people and works to deliver public services to those in need.” The presidential hopeful was previously a Vice-Chancellor at the University of Cape Town and sat on the board of mining conglomerate, Anglo-America. She also served on the Board of Trustees for the Rockefeller Foundation, the Mo Ibrahim Foundation and the Alliance for a Green Revolution in Africa. In 2011, Ramphele was named one Forbes’ Most Powerful African Women. *Source Forbes Follow Farai on Twitter @FaraiToday]]>