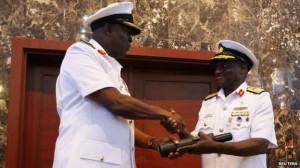 But will the new leaders make any difference?[/caption]

As dozens of bodies were being buried in north-east Nigeria following yet more attacks on Sunday by suspected Islamist militants, President Goodluck Jonathan was about to make a surprising statement acknowledging serious lapses within his own armed forces.

He suggested the military operation against the group popularly known as Boko Haram had at times been undermined by divisions within the security forces. Two weeks after dismissing the heads of the Army, Air Force and Navy, President Jonathan has now called on the newly appointed military chiefs to cooperate.

“Sometimes we used to hear some kind of mutual competition among the army chiefs and security personnel,” he said at the opening of Air Force Secondary School in Yola, Adamawa State – one of three states under a state of emergency due to the Islamist rebellion.

“But this time around we will not tolerate any unnecessary competition that will bring retrogression to this country.” A special advisor to President Jonathan later denied that “unhealthy competition” was the reason the military chiefs had been fired. “The president has nothing but praise for the manner in which the outgoing service chiefs did their job in very challenging circumstances,” read a statement from Reuben Abati. Nevertheless Mr Jonathan has for the first time admitted that during the fight against Boko Haram serious mistakes have been made that have left him far from impressed. Moment of shame In early December, Islamist militants attacked the Air Force base in the city of Maiduguri destroying two attack helicopters – a strike right at the heart of the nation’s military might. During his speech in Yola, Mr Jonathan recalled the awkward moment when, following this attack, a journalist had asked him: “Mr president is it not shameful?” The Nigerian leader said he later turned to his then Chief of Defence Staff and asked: “If you were me, how would you have felt?” “I believe we will no longer experience that kind of situation. That happened because of some obvious lapses,” he told the audience in Yola. He said that with a new Chief of Defence Staff working with “properly briefed” colleagues, “the Nigerian Armed Forces will be a different Armed Forces”. The question remains: How many lives could have been saved had it not been for the unhealthy competition and mistakes which the president referred to?

There have been signs that the forces fighting Boko Haram needed reorganising.

Initially the military offensive was carried out by the Joint Task Force or JTF – a combined unit made up of all the armed forces and the police. In August, the JTF was disbanded and the entire operation was handed to a newly created army division. As if to defend its military effort, the outgoing JTF spokesman told the world that the Boko Haram leader, Abubakar Shekau, had just been killed. He has since appeared very much alive in video recordings gloating over Boko Haram attacks. Then came the surprise on 16 January when all the military chiefs were fired by the president. Some analysts believe the shake-up was not carried out purely for security reasons but was in part a political move aimed at securing support ahead of the 2015 elections. Although President Jonathan has not publicly stated his intention to run, his assumed ambition to seek re-election has created a split in the governing party prompting defections to the opposition. Throats slit It is not hard to see that the current strategy against Boko Haram is failing some communities in north-east Nigeria. Sunday’s attack on a market and homes in Borno State’s Kawuri Village left more than 50 people dead. None of the survivors mentioned any resistance or counter attack by the military to save the vulnerable population. They spoke of dead bodies littering the streets and hundreds of homes being torched. The military has refused to comment on the attack, instead referring journalists to the police but there are many unanswered questions. How, for example, is it that the insurgents were able to drive into Kawuri in a large convoy of vehicles, carry out an attack for several hours and leave? On the same day there were scenes of horror at a church in Waga Chakawa village in neighbouring Adamawa State. [caption id="attachment_8383" align="alignright" width="300"] 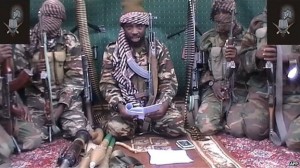 Boko Haram leader Abubakar Shekau (C) has appeared in several video recordings in recent months despite claims he had been killed by the military[/caption] Suspected Boko Haram militants locked the doors, shot anyone that tried to escape through the windows and then slit the throats of the congregation. More than 30 people were killed, including children. “We need a greater security presence around that area,” said Stephen Mamza Dami, the Bishop of Yola, after the attack. “The new military chiefs should be given full power to take control of the situation. If politics gets involved in it there is no way it can be controlled,” he told the BBC. Boko Haram has in the past stated it was fighting to create an Islamic State but some Nigerians believe there are politicians who stand to gain from the insurgency. The Bishop of Yola pointed to a forced exodus of Christians following repeated attacks on residents of Gwoza close to the Cameroonian border. “If the Christians there are wiped out completely, then there is no way a Christian can ever be elected even as a councillor in that area,” he added, suggesting the attacks could be a way of getting rid of political rivals. Security analysts believe that, to contain the insurgency, there needs to be far greater cooperation between Nigeria, Cameroon, Niger and Chad as the militants are taking advantage of their porous borders. Setting deadlines for an end to the conflict is widely viewed as harmful. When Air Marshal Alex Badeh was given the top job of Chief of Defence staff this month, he stated that the insurgency must end by April. “Such statements are like a red rag to a bull,” said international relations analyst Aderemi Oyewumi. “They lead to more damage being inflicted. No timelines should be given. They should get on with the job, keep their heads down,” he said, adding that the importance of the armed forces working together cannot be overemphasized. Perhaps it was no coincidence that the church attack was in Air Marshall Badeh’s home state of Adamawa. Some analysts suggest it was a response to the chest-thumping statement of yet another deadline. *Source BBC]]>