President Yoweri Museveni has called for the protection of government land including that vacated by refugees saying it can be used to attract investors who will build growth centres to attract people from poverty. [caption id="attachment_8632" align="alignleft" width="300"] 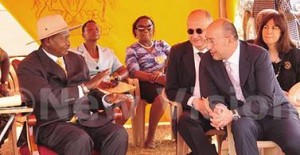 President Yoweri Museveni chatting with the Turkish Investor Sitki Ayan during the launch of the Special Economic zone in Kaweweta .PHOTO /ABU MWESIGWA
newvision[/caption] “I have brought you these rich people to get you out of poverty. This land used to belong to West Mengo Cooperative society but after the war we bought it for the army. When we got Turkish investors looking for land to invest, I said we have our land here. Our people need weapons, bullets, uniform etc, these people want to put factories here, a modern abattoir, milk and fruit processing plants, a facility for modern agro production and a factory with equipment for textiles. They are also interested in medicinal herbs and aromatic herbs which our local people know. These cost a lot of money abroad. This will become a town for factories, a growth centre to attract people from poverty,” he said. The President was Tuesday presiding over the ground breaking ceremony for a US$300million, 18 square miles facility that will also house a beef production zone, host a world class abattoir to consume about 400 cows a day, breeding of new strains of livestock, feeding and production areas, slaughter houses, packing facilities and maintenance hall for the cattle depository. The development follows an earlier meeting in 2012 during which President Museveni held talks with the Turkish investors led by the ASB Group Chief Executive Officer (CEO) Sitki Ayan over business opportunities in Uganda particularly the creation of a special economic zone. The President warned Ugandans against land fragmentation saying it creates problems and does not attract investments said there is a lot of market in Turkey for products such as coffee which will be produced and processed here before export. On the issue of compensation for the 149 families displaced by the development, President Museveni wondered why they would be compensated since they are the ones who encroached on government land. He however said all families should be registered while a solution for them is sought. He pledged to provide two milk cooler trucks for the sub counties of Kanyogoga and Ngoma to collect milk for sell in Kampala. The President also directed local leaders to investigate and cause to be arrested people involved in bush burning, an activity which has led to the destruction of various pine forests worth billions of shillings. He also pledged to provide two water tankers to large scale cattle keepers who want to transport water for their animals as long as they fuel them. ASB Group Chairman Sitki Ayan said the project once completed will be the biggest in the world and will provide contract farming for locals, create vast employment opportunities and provide modern technology in environmental and infrastructure development. He said Uganda has the potential to be the centre for production, distribution and processing for the whole of Africa. Turkey already has its largest textile industry in Ethiopia and with such a big investment in beef production Uganda will have secured a major business development. According to statistics, trade between Turkey and Uganda has grown in the past decade from about sh4.6b in 2003 to about sh51b in 2009. The Deputy Chief of Defence Forces, General Charles Angina said the investment will empower them economically and strengthen their means to improve their defence and weaponry systems. Initially the Uganda Land Commission led by the Chairman Baguma Isoke exchanged agreements with the Turkish investors to cement the deal for the special economic zone programme witnessed by the Minister of state for Finance in charge of planning Matia Kasaija. *New Vision]]>