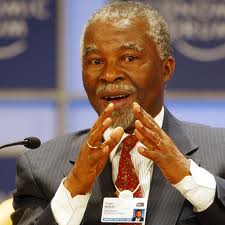 Former President of South Africa and Chair of the High-Level Panel on Illicit Financial Flows Thabo Mbeki[/caption] 6 February 2014 – United Nations Deputy Secretary-General Jan Eliasson and former South African President Thabo Mbeki today stressed the need for global efforts to address the problem of illicit financial flows from Africa, which have crippled the continent’s development over the last few decades. It is estimated that Africa loses over $50 billion a year in illicit financial flows, far exceeding the amount of official development assistance the continent receives. Addressing the opening session of the High-level Panel on Illicit Financial Flows from Africa, held at UN Headquarters, Mr. Eliasson said the $50 billion in losses is a “staggering” figure that represents damage to individuals and Africa’s development and governance agenda as a whole. “If we can stop Africa from losing resources in illicit outflows, then these funds can be directed to meeting the needs of the continent’s people and allowing them to build a better future,” he stated. The High-level Panel, established by the UN Economic Commission for Africa (ECA) and the African Union (AU), was inaugurated in February 2012 to address the debilitating problem of the illicit financial flows from continent. It is chaired by Mr. Mbeki and composed of nine other distinguished personalities from within and outside Africa. Mr. Mbeki told a news conference after the session that the money lost each year is capital which is “generated within the continent, belongs within the continent, but then leaves by these illicit means.” About two thirds of the illicit outflows originate from the activities of multinational corporations, while about 30 per cent or so arise from “straightforward criminal activity,” including narcotics and human trafficking, as well as corrupt practices. As for where the money is going once it leaves the continent, Mr. Mbeki said the receiving countries are the developed countries as well as the tax havens. “We’ve got to try and understand this matter of this illicit capital outflows out of the continent, both from the point of view of we, the exporting continent, and then the receiving countries so that our recommendations will have to address both ends of this.” The Panel is currently in the United States to meet with representatives of the US Government, private sector, academia civil society, and multilateral institutions to discuss the issue of illicit financial flows. It is expected to submit its final report by June this year. The report will include observations about the problem, as well as detailed proposals on how both the continent and the rest of the world can respond. *Source UN News Center]]>