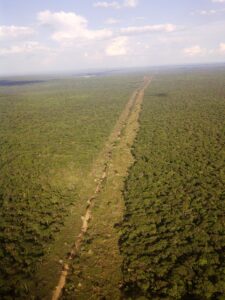 Grindrod Limited (http://www.grindrod.co.za), the JSE listed freight and logistics service provider, through its wholly owned subsidiary Grindrod Mauritius, today announced the opportunity to work with Northwest Rail Company Limited (“NWR”), to build, operate and maintain a new 590km cape gauge railway from Chingola in the heart of the old Zambian Copperbelt to the Angolan border. These exclusive rights were granted to NWR, a Zambian company, by the Government of Zambia in July 2006. The agreement signed today will enable the parties to conclude the bankable feasibility study which is currently underway. The railway is to be built in two phases – Phase I extending from Chingola to the Kansanshi, Lumwana and Kalumbila mines (290 km of track), and Phase II to connect with the Benguela line on the Zambian-Angola border near Jimbe. Phase I is intended to service existing ore and finished copper traffic, and Phase II is intended to open up a direct corridor to Lobito which would allow landlocked Zambia to import oil directly from Angola, and to stimulate further mining activity in the Western Copperbelt region. The estimated capital cost of Phase 1 is US$ 489 million while Phase 2 of the NWR project is estimated to cost US$500 million. KPMG’s Infrastructure and Major Projects team have successfully developed the project with NWR over the last twelve months and have facilitated the closure of the deal. Subject to the conclusion of the Phase 1 bankability feasibility study, construction is expected to commence during 2014. “I have been developing this project for a number of years and the synergies with Grindrod’s Rail businesses, makes Grindrod an ideal partner in the joint venture and means we will be able to bring this project to being in the shortest possible time”, said Honourable Enoch Kavindele, a former Vice-President of Zambia and founder/owner of NWR. Grindrod’s Rail division operates railways and builds, refurbishes and maintains locomotives and wagons provides rail signaling systems and constructs and maintains track infrastructure. Said James Holley, Grindrod Rail, Divisional Chief Executive, “We have spent the last few years developing our rail capabilities and growing our capacity to participate in the growth in the Africa rail sector. It has meant we are perfectly placed to take up opportunities like this on the African continent”. Said Dave Rennie, CEO Grindrod Freight Services –Ports & Rail, “This investment will enable Grindrod to extract synergies from our existing investments in the North South rail corridor and our port operations in Maputo, Richards Bay and Durban. We also see great potential in creating an Atlantic gateway to Central Africa through Lobito and look forward to playing our part in making this a reality with the development of Phase II”. The Copperbelt straddles the border of Northern Zambia and the Southern DRC and is amongst the richest under developed geological regions in Africa. Current production of copper in this area accounts for around 8% of the world’s production, and BMI International forecasts sustained growth in the Zambian copper industry at 5% per annum over the next decade. Said Dave Rennie, “We like the economic fundamentals of the copper market. We have previously been highly focused on the coal and iron ore markets so this gives us a good opportunity to diversify our bulk commodity mix”.

Existing copper mines are located in the Eastern Copperbelt and are serviced by smelters located near to Chingola (Zambia) and Lubumbashi (DRC). New mine developments have started, and more are planned, in the Central and Western Copperbelt area of Zambia which need to transport ore up to 300kms for processing. Road infrastructure is poor, and the cost of road transport is becoming prohibitive. An alternative rail transport solution will be both more economic for the North Western province of Zambia and much less damaging to the local environmental. Said Enoch Kavindele, “Grindrod has proven itself to be a good custodian of state assets elsewhere in Africa and I believe that as Zambians, we can be pleased to have them as our partners in this important project which will create thousands of jobs in the country in accordance with government policy. *In partnership with APO]]>