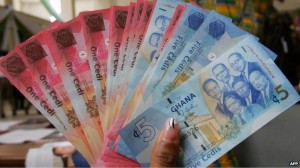 Ghana has defended its decision to limit foreign exchange withdrawals in a bid to halt the slide in its currency the cedi.

Foreign currency account holders have been limited to withdrawals of $10,000 (£6,000), which must be supported by evidence of an overseas trip. The cedi has fallen to a record low in recent days. Central Bank governor Kofi Wampah has also raised interest rates to 18% to attract more investment. Ghana is the latest emerging markets whose currency has fallen recently. The value of the South African rand has hit record lows, while currencies in Turkey and India have also been hit.

Analysts say investors have switched away from emerging markets since the US Federal Reserve scaled back its stimulus programme.

Ghana has also been hit by falls in the prices of its two major exports – gold and cocoa. The cedi has lost about 23% of its value over the past year. Government critics say the problems have been exacerbated by high public spending and mismanagement – charges the government denies. It has started to earn money from offshore oil fields but analysts say much of this is being used to repay foreign loans. The BBC’s Sammy Darko in the capital Accra says the freefall of the cedi has led to desperate measures by government and even some of the clergy. Last week, renowned cleric Archbishop Duncan Williams prayed for the national currency to start rising in value. “I command the resurrection of the cedi,” he told worshippers at his Action Faith Chapel in Accra. Our correspondent says many Ghanaians are concerned about price rises, which will be made worse by Thursday’s interest rate hike. In addition to the limit of foreign exchange withdrawals, Mr Wampah said banks would not be allowed to grant loans in foreign currencies to customers who are only paid in cedis. “The main purpose of this regulation is to ensure that we continue to use the cedi as the legal tender,” he said. But one forex trader in Accra told our reporter that the limit would not be effective. “If someone brings in $20,000 to change, who would turn it down?” asked the trader, who wished to remain anonymous. But Mr Wampah warned forex traders they had to follow the new rules or be “dealt with”. “For the forex bureaux, the issues are bordering on anti money-laundering… Ghana was black listed in 2012 because of our laxity.” “We also require more identification when purchasing or selling to forex bureaux and we also request them to computerise so that it will be easier for our supervisors to verify what they are doing.” He said plain clothes inspectors would be sent to check on the bureaux. *BBC]]>