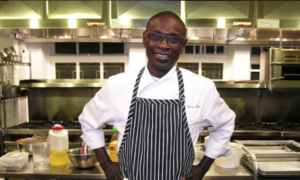 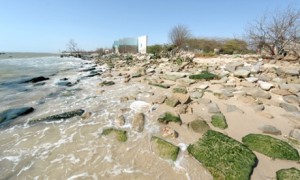 A the beach of the village of Doun Baba Dieye, in northern Senegal. Photograph: Seyllou/AFP/Getty Images[/caption] “ I’m working on two fronts. There are a lot of biases in Africa, ” says Thiam. “There’s a stigma with everything that’s local” – a situation that’s difficult to imagine in New York, where anything locally -sourced is worshiped among locavore and foodie types. Thiam never thought he’d be extolling the virtues of fonio or organizing culinary exchange trips to Senegal when he arrived here. His short visit turned into a 24-year stay. While on a stopover from Dakar to Ohio, where he had intended to study physics and chemistry, Thiam visited a friend. He lived in an exceptionally seedy, rat-infested Times Square hotel, full of Senegalese immigrants, at a time when Times Square was dangerous and crime-ridden. On Thiam’s third day, all his cash was stolen. “From my transportation to Ohio, to like, my breakfast the next day,” recalls Thiam, who laughs about it now. He immediately jumped into bussing tables at a West Village restaurant where the kitchen captivated him. He was astounded to find men there. “It was very new. I was from a culture where the kitchen belongs to women,” says Thiam. Too embarrassed and proud to ask his family for help or return home to Senegal, Thiam remained in Manhattan. He meticulously studied his new textbook, The Joy of Cooking by Julia Childs, and worked his way up from dish washer to prep cook; salad person to line cook; finally chef and restaurateur. Thiam’s commercial kitchen, where he cooks for his catering company, is in Little Senegal. Nearby, a small group of men wearing a variety of robes, street clothes, kaftans and kufi caps socialize. When asked what they think of fonio selling in the mainstream US consumer market, they answer in a chorus of approval, slightly amused that a non-West African would ask. One man says it would be a tremendous economic boost for countries like Senegal, Mali and Guinea. However, not everyone in Little Senegal is happy about the idea of mass-fonio-ization of the American diet. Ms Fadiga, who is from Guinea, concedes large scale fonio exports would be profitable for Guinea’s farmers, but she’s apprehensive about massive market demands from abroad. It’s a concern that’s easy to understand given the history of Africa’s people, land and resources being exploited by the west. Fair Trade certification protects some farmers and communities in developing countries. There are now Fair Trade quinoa brands, as some in Andean communities were no longer able to eat it because of skyrocketing demand and price over the past 12 years. [caption id="attachment_8465" align="alignleft" width="300"] 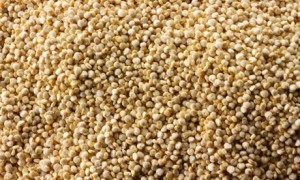 Can fonio be the quinoa slayer? Photograph: Paul Williams/Alamy[/caption] Will Thiam’s fonio be certified Fair Trade? Thiam says his fonio is fair trade in the sense that he conducts his business fairly, simply put, “They trust me and I trust them.” Does Ms Fadiga have to worry about a fonio frenzy? Yes and no. It remains to be seen whether Thiam’s AfroEats can usher in a Senegalese food movement – and whether fonio can knock quinoa off its Whole Foods pedestal. But here’s one sign: two blocks north of Little Senegal, an upscale American-owned bistro featuring Afro-Asian-American cuisine serves an entree of wild bass with “African fonio” for $26. Serving fonio in a trendy Harlem restaurant to a mix of New York diners would be a definite nudge into the culinary limelight. But in an odd twist, it’s been revealed they are serving faux fonio; it’s just millet cultivated in the US. Imitation may be the highest form of flattery for fonio, which has now achieved enough modest recognition to be counterfeited. *Source The Guardian]]>