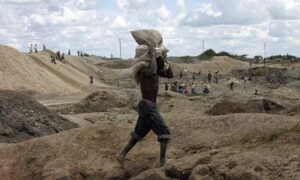 Mining activities in DRC are the subject of an ongoing inquiry into suspected malpractice by customs agents and companies. Photograph: David Lewis/Reuters[/caption] Democratic Republic of the Congo (DRC) is owed an estimated $3.7bn (£2.2bn) in unpaid customs duties and fines by companies operating in its copper-rich Katanga province between 2008 and 2013, according to an unpublished report commissioned by the public prosecutor’s office. The report, dated November 2013, is part of an ongoing government investigation into suspected malpractice by customs agents and companies in the vast south-eastern province. It accuses companies there of under-declaring the value of imports and exports, and sometimes avoiding tax altogether, often with the collusion of customs officials. Some firms named in the report questioned the accuracy of its findings, while the head of the customs agency in Katanga said proper consultations had not been held with the companies, and suggested the report’s findings were exaggerated. The public prosecutor, Flory Kabange Numbi, who declined to comment on the report, said in a letter to local rights groups that it was too early to draw conclusions about the outcome of the wider investigation. DRC’s mining production has been limited by energy and infrastructure problems. The government is under pressure to maximise revenues from the sector to help the 65-million strong population out of poverty. Two government ministers said the broader investigation must be completed, adding that any cash owed by firms must be paid to the government. The report, compiled during a 10-day mission to Katanga led by Congolese attorney general Simon Nyandu Shabandu, examined 25 cases of alleged customs infractions. It found that 11 companies were liable for $741m in unpaid taxes and fines, including Mutanda Mining, a copper miner 69%-owned by Glencore Xstrata plc. Penalties were agreed by all parties after talks between the firms and the customs agency, the report said, although it noted that the mission did not visit Mutanda Mining, pending instructions from authorities. Glencore strongly denied any wrongdoing and said the report was inaccurate. It had not agreed to any penalties, it added. “Contrary to what is stated in the draft document, no contact was made by the ‘mission’ with Mutanda mining. Mutanda has no outstanding taxes or fines,” a Glencore spokesman said. The report said a further 252 alleged cases remain outstanding, worth an estimated $3bn to the state in total. Chemaf, a privately owned Congolese company among the 11 identified by the report as owing taxes, also denied the findings. “We are confirming that Chemaf does not owe $21.4m in unpaid taxes,” the Chemaf director, Sebastien Ansel, said. Hyper Psaro, United Petroleum and United Oil and Soap, all of which belong to the private Congolese fuel, commodities and transportation conglomerate Hyper Psaro Group, and are named in the report as owing taxes, declined to comment. Other companies identified as owing money – Comexas, Socimex, Sabot, Marine International, Frontier, Congo Loyal and Trade Service – either did not respond to requests for comment or could not immediately be traced. International mining firms have invested billions in Katanga in recent years, eager to tap its vast copper and cobalt reserves. Mining made up 15.4% of DRC’s gross domestic product in 2012, according to the International Monetary Fund. DRC produced 600,000 tons of copper in 2012, making it the world’s eighth-largest producer. Shabandu’s team complained in the report that it was given only 10 days to carry out its work in Katanga, adding that firms did not co-operate fully with investigators. Chemaf was deemed among the most unco-operative. “It is difficult for us to comment on specifics in the report when the report has not been shared with us,” Ansel said. “Chemaf does co-operate appropriately with the various Congolese agencies, and we are not aware of any instances where it has not been the case.” Corruption allegations The report highlighted alleged corruption among officials of DRC’s customs agency (DGDA) in the province, some of whom were accused of destroying evidence of tax evasion. “The contempt of companies with regard to the customs administration (refusing to answer invitations) and the nonchalance of agents of the DGDA show an excessive degree of impunity which requires energetic action to uphold the law,” the report concluded. The provincial director of the customs agency in Katanga questioned the accuracy of the report’s figures, denying that some meetings with the companies had taken place. “There is an inflation of the numbers, because discussions were not held with the stakeholders. This inflation of numbers is dangerous,” David Kalande said. In a letter to ASADHO, a local human rights group formed in response to widespread violations under the late former dictator Mobutu Sese Seko, Numbi rejected a demand to publish the report. “It is understood that the judicial inquiry in the strict sense remains at an investigative stage, with the background of the presumption of innocence,” read the public prosecutor’s letter, which was copied to senior government figures. “Judicial inquiries do not proceed following the diktat or cries of alarm of journalists or human rights defenders.” The investigation was launched after a letter from the communications minister, Lambert Mende, to President Joseph Kabila – copied to Prime Minister Augustin Matata Ponyo and Numbi – that raised fears of malpractice in Katanga. “Sources close to the [Katanga customs agency] have sent me documents containing bundles of indications of cases of corruption, misappropriation and fraud [at the agency],” wrote Mende, who is also the government spokesman. He said the investigation would be completed at its own speed. The finance minister, Patrice Kitebi, said: “I support the process carried out by the attorney general that aims to recover the revenues not paid by these traders.” The total of $3.7bn in unpaid duties and fines would be equivalent to nearly half of the annual budget in DRC, where simmering local conflicts and rampant corruption have hobbled internationally-backed efforts to pacify and develop the mineral-rich country. DRC’s budget is expected to be $8.2bn in 2014. *Source The Guardian]]>