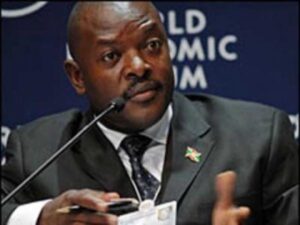 Burundi President, Pierre Nkurunziza is risking war by attempting to scrap the Presidential term limits from the Constitution to entrench his power[/caption] Pressure has been mounting on the US embassy in Bujumbura to speak out on whether the two Burundian politicians sought refuge at the western country’s premises. Trouble started with the ruling party, CNDD-FDD, attempting to get rid of the 2000 Arusha Peace Accord with the view of amending the Constitution to allow President Pierre Nkurunziza rule for another third term. According to the Constitution, the President “shall be elected for a term of five years, renewable only once. No one may serve more than two presidential terms.” Nkurunziza was elected president unopposed by members of Parliament (acting as an electoral college) on 19 August 2005 and took office on 26 August 2005. He was re-elected in 2010 with more than 91 percent of the votes amidst an opposition boycott and sworn in for his second term on 26 August 2010. With only a year left to sum up his mandatory two terms in office, Nkurunziza has been exhibiting intentions to maintain a grip on power even at the cost of plunging the nation into chaos. Facing stiff resistance from Busokoza, who is a Tutsi and regarded as stabilising factor in Burundi’s tribal politics, Nkurunziza decided to kick out the Vice President.   Attempts to bring on board a new Vice President from the main opposition party UPRONA hit a dead end, leading to a stalemate that has raised fears of the return to a civil war. It should be remembered that the Burundi Constitution was agreed upon by antagonistic parties after a protracted civil war in which thousands were killed. Former presidents Nelson Mandela and Julius Nyerere of South Africa and Tanzanian respectively played a pivotal role as facilitators of the peace agreement. Under the Arusha agreement, the Government is made up of 60 percent Hutu, 40 percent Tutsi; the National Assembly has the same ratio; and the Senate (an institution presumably designed “to assure the minority”) and the Army are explicitly to be constituted of 50 percent Hutu, 50 percent Tutsi. The Senate also allocates three seats to the Twa minority. Greed for power  Diplomatic sources told Chimpreports on Wednesday morning that the Arusha agreements had balanced the two tribes’ quest for power, leading to relative political stability and economic growth in the country that was for long ravaged by war. However, in an attempt by the ruling party to get rid of that binding Constitution in total disregard of the general consensus from all parties, the country has been pushed to the edge. [caption id="attachment_8403" align="alignright" width="300"] 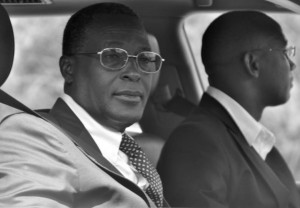 Burundi Vice President (L) Bernard Busokoza is on the run[/caption] It is feared that what played out in South Sudan following the sacking of Riek Machar as Vice President in December last year has a semblance to the unfolding events in Burundi. Machar’s presence in government had helped the Neur to counterbalance power with the Dinka tribe of President Salva Kiir.When Kiir decided to get rid of Machar, hell broke loose, leading to wide scale killings in South Sudan. Busokoza’s position acted as a balance of power with the Hutu-dominated government of Nkurunziza. The second contentious issue that has pushed Burundi to the edge of war is the controversial appointment of a new Land Commission to resettle Hutu returnees. While the ruling party wants to give it judicial powers, Busokoza and UPRONA want the last decision on distribution of land and resettlement for the returnees to remain in the hands of local councils at the grassroot levels. It is feared that in distributing land, the Tutsi could be marginalised. UPRONA claims if the Land Commission has the final ruling, the fear is that it becomes simply – take from the Tutsi to give to Hutu. The crisis in Burundi comes at a time when the Great Lakes region is struggling to cope up with the turmoil in South Sudan, DRC and Central African Republic in which thousands of people have been killed in the last two years. *Source Chimpreports -]]>

One response to “Crisis in Burundi As Vice President Escapes”