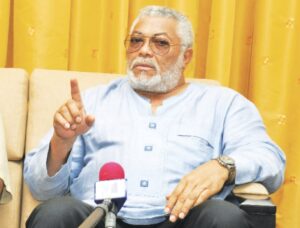 Former President Jerry John Rawlings has said his calls for justice against ‘corrupt officials’ in the Kufuor adminstration should not be misconstrued as vengeance. He said corruption had cost the nation dearly and those who dabbled in it must pay for their crimes. Speaking to the Daily Graphic on the fringes of a memorial service organised by the Action Chapel International (ACI) in Accra in honour of the late South African President Nelson Mandela, Flt Lt Rawlings described as misplaced, blanket calls within certain circles for people to be forgiven in the country. He said corrupt politicians, for instance, could not be forgiven in a vacuum and insisted that at worst, the person being forgiven must first show remorse. “Forgiveness must always be motivated by a genuine sign of remorse from the offender President Rawlings said. The former President joined  President John Dramani Mahama, members of the diplomatic corps and the ACI congregation to celebrate the life of the departed first black South African President. Flt Lt Rawlings recently descended heavily on former President J.A. Kufuor, accusing him of leading the most corrupt regime in the history of Ghana. During the church service, Archbishop Nicholas Duncan-Williams made a strong case for forgiveness;, a lesson he encouraged the congregation to learn from the life and deeds of Mr Mandela. But when asked if the  comments were not directly related to his criticism of Mr Kufuor, President Rawlings responded: “Aah, the church house ambush. Duncan Williams does that once in a while and the President, no doubt, spoke on similar lines.” Going biblical, Mr Rawlings said: “A few days ago the biblical chosen children of God, the Israelis, held annual UN-supported ceremonies across the world as a constant reminder of the horrors of the Nazi holocaust. This is in spite of the fact that they may have forgiven the Germans for the deaths of millions of their compatriots. And why is it detestable and why are others afraid to remind ourselves of the consequences of corruption, impunity and abuse of power in our country? There are those who also profit from this socio-economic injustice.” He continued: “In terms of justice before forgiveness, did they (Israelis) not hunt down German/Nazi officers who spearheaded the mass murder of millions of Jews and bring them to justice? “ “Occasionally, these days they are still able to fish out one or two officers who fled Germany and took up a new life elsewhere. Their search for justice, even in forgiveness has not ended,” President Rawlings said. He asked whether the Israeli remained a weak people who could be rounded up “again and again as in our part of the world.”  The answer he offered was “no” because they took the high ground and built their country into a formidable and secure country. “Today, Israel is one of the most powerful nations in the world.” According to the former President, the corrupt and oppressive characters who fleeced the country of its resources, continue to hold the good people of Ghana hostage. “When the good people of Ghana revolted against oppressive tendencies they held back from exacting full justice or maximum vengeance and the military paid the highest price, “ he said. He then posed the question: “What has changed?” and explained that the persecutors were not interested in recognising the equality of others and the people’s right to socio-economic justice. “While the good people of Ghana have the capacity to forgive, these corrupt and oppressive characters do not have an iota of grace or the capacity to forgive anything. And by the way, the right to revolt is sanctioned by God – you don’t need the ‘Ethics of Man’ to tell you that,” Mr Rawlings said. President Rawlings said it was as if the punishment meted out by ‘the rage of the revolution’ was lost on some people because the corruption since 2000 was many times above what led to the rage in 1979. Asked why he kept making reference to ‘Free Will’ when he was being seen off by Archbishop Duncan Williams and Bishop Dag Hewart-Mills, President Rawlings said it was in relation to the criticism of the Archbishop’s comments about the passing of Komla Dumor. “I suspected where the Archbishop was coming from and thought perhaps if they could educate their congregation on the gift of free will, then the comments could be better understood,” he said. President Rawlings added that after life, the next most valuable gift God gave people was free will. “God could have voluntarily willed us to love him but he gave us the free will to make the choice ourselves, and what is more unique than free will? “ President John Mahama and  Archbishop Duncan Williams spoke extensively about forgiveness. *Source Daily Graphic *Source]]>