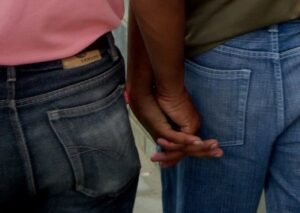 Gays and their collaborators now risk 14 years in jail in Nigeria[/caption] The Nigerian Government has accused western nations of double standards over a new law banning same-sex marriages. President Goodluck Jonathan endorsed the new law in January, effectively criminalizing same-sex marriages and public show of same-sex affection. Nigeria has faced intense criticisms mainly from the United States and the United Kingdom over the legislations. The two countries have accused the government of violating the peoples’ rights. Nigeria’s acting Minister of Foreign Affairs, Viola Onwuliri, said such criticisms stem from the “double standards” of the West. Speaking to the News Agency of Nigeria, NAN, in Addis Ababa, Ethiopia, on the sidelines of the just concluded AU summit, Ms. Onwuliri said President Jonathan signed the law in the interest of Nigerians and democracy. “What happened in Nigeria is democracy in action and it will really be unfortunate that people who are talking about democracy when they now see democracy work, they want us to go against democracy,” she said. “Is democracy for pick and choose? When it suites them they want us to do good governance and democracy, but when it does not suit them they want us to go against the democracy that has been put in place. “The National Assembly took a decision, the National Assembly is the face of democracy in Nigeria, they are the representatives of the people, they form the voice of the people and they have spoken,’’ she said. The European Union, Canada and the United States have criticised the new law, saying it negates the fundamental human rights of individuals enshrined in the Nigeria constitution. On the situation in South Sudan and the Central African Republic, the minister said Nigeria strongly backs the AU and regional groups’ role in demanding the return of peace and stability in the regions. “Nigeria has taken a position on the need for peaceful resolutions in conflict situations in Africa, safety of lives and property and ensuring that women and children are safe in conflict areas,’’ she said. The minister acknowledged that there had been demands for Nigeria to contribute troops to the African- led International Mission (MISCA) in the Central African Republic (CAR). “The decision (to deploy troops to CAR) is for the president and commander-in-chief, but it’s not something new to us because Nigeria has been involved in peacekeeping since the 1960s.’’ Around 5,500 AU troops taking part in the MISCA peacekeeping mission have been joined by 1,600 French soldiers in the CAR. In November, UN Secretary General Ban Ki-moon, told the UN Security Council that a UN force of up to 9,000 troops and 1,700 police could be needed in CAR. NAN reports that at the just concluded 22nd Ordinary Session of the AU in Ethiopia, Nigeria pledged 1.5million dollars to support MISCA. Nigeria also donated two million dollars to Africa Solidarity Initiative, an AU initiative that supports reconstruction and development in Africa countries emerging from conflict. (NAN) *Source Premium Times]]>