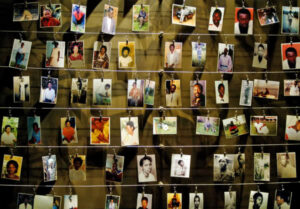 Pictures of killed people donated by survivors are installed on a wall inside the Gisozi memorial in Kigali April 5, 2004 which depicts the country’s 1994 genocide in which 800,000 Tutsi and politically moderate Hutus died. Rwandans hungry for justice demanded tougher efforts to track down and punish killers who carried out the 1994 genocide, saying there could be no reconciliation while suspects were still at large. REUTERS/Rad[/caption] Pascal Simbikangwa, accused of complicity in genocide and crimes against humanity, will have to face jury trial, for allegedly having supplied with weapons and other material the officers guarding the roadblocks and giving them instructions that lead to the massacre of numerous Tutsis. « We welcome this long-awaited trial that should shed the light on important events that occurred during the 1994 genocide in Rwanda » said Sheila Muwanga, FIDH Vice-President. « With this trial, France is finally living up to its legal obligations to deliver justice for the victims of the Rwandan genocide. Hopefully it will be the first of other trials against Rwandan genocide suspects currently living in France », declared Patrick Baudouin, FIDH honorary president and coordinator of the FIDH Litigation Action Group. While being investigated in France for the forging of administrative documents, Pascal Simbikangwa was arrested on the French territory and investigated for his alleged responsibility in crimes against humanity and crimes of genocide committed in 1994 in Rwanda, after a complaint was filed against him in February 2009. FIDH and its member organisation in France, the French League for Human Rights (LDH), are civil parties in these proceedings next to three other human rights NGOs : Collectif des parties civiles rwandaises (CPCR), Survie and LICRA. *Source International Federation of Human Rights (FIDH)/APO]]>