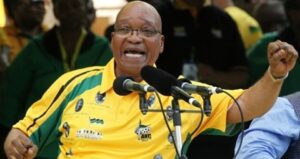 President Jacob Zuma took advantage of the audience at his keynote address to remind everyone that Nelson Mandela was a member of the ANC. President Jacob Zuma launched the ANC manifesto on Saturday, with his keynote address focusing more on what the party has achieved over the past 20 years than what it intends to do going forward. But with only a few months left before the national elections, Zuma did not miss the opportunity to remind all that former president Nelson Mandela belonged to the ANC. “Comrade Madiba exemplified the importance of adherence to the core values and tradition of the ANC. He was unambiguous about the fact that the ANC has always been the organisation best placed to unite the broadest cross-section of South Africans around the objectives of the National Democratic Revolution and put in place a united, non-racial, non-sexist, democratic and prosperous South Africa as enshrined in the Freedom Charter,” said Zuma. But the ANC under Zuma has been criticised for not living up to Mandela’s standards, with the spending of over R200-million to upgrade his Nkandla homestead cited as an example. Despite all the criticism, the ANC managed to fill the 60 000-seater Mbombela stadium in Nelspruit and four additional overflow areas.  And with the thousands of members carefully selected from their respective ANC branches, Zuma received loud applause from his supporters this time around. Zuma was embarrassed in front of international guests last month when a large crowd booed him during Mandela’s memorial service at the FNB stadium in Johannesburg. NDP commitment Zuma reiterated the ANC’s commitment to implement the National Development Plan (NDP), which alliance partners have criticised as being too similar to the neo-liberal Gear. The NDP is a living and dynamic document and the overwhelming majority of South Africans support its objectives of eradicating poverty and inequality. The ANC urges all our people to actively participate in its implementation, to move our country forward. Cosatu president Sdumo Dlamini on Saturday changed his tune when he said Cosatu supported the manifesto, which included the NDP. Dlamini, who is a close ally of Zuma, said the labour federation would throw its support behind the ANC ahead of the elections. This contradicted the stance taken by Cosatu’s largest affiliate, the National Union of Metalworkers of South Africa (Numsa), which took a resolution at its special congress recently not to campaign for the ANC and withdrew its financial support. Jobs and mining Zuma said his administration would create six million work opportunities by 2019 through the consolidation of the Public Works programme. He said the ANC would move ahead with measures to strengthen the state mining company and ensure increased beneficiation for industrialisation. “We have also broadened Mangaung’s call for increasing the share of mineral resources rents and will embark on comprehensive review of our tax system,” said Zuma. He said the party’s priorities remained education, health, rural development, land reform and food security, the creation of more jobs, decent work and sustainable livelihoods, and the fight against crime and corruption. “We are also continuing to expand access to housing and basic services and building integrated human settlements.” *Source M & G ]]>