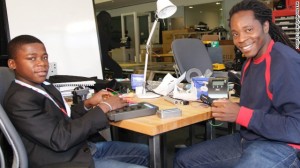 David Sengeh, right, mentoring Kelvin Doe, a 15-year-old Sierra Leonean who built a radio station from scrap materials[/caption] When Chinua Achebe, the father of modern African literature, passed away recently, the world noticed. There was an Achebe quote in particular that was repeated many times by various people, from CNN writers to friends in remote villages in Africa. “Until the lions have their own historians, the history of the hunt will always glorify the hunter.” Achebe explained that once he realized the truth in this saying, he had to be a writer, he had to be that historian to capture the stories of his native African people. This idea of telling one’s own story has now been championed by young African notables like author Chimamanda Adichie — whose TED Talk The Danger of a Single Story has been viewed roughly four million times and BBC anchor Komla Dumor– whose talk Telling the African Story at TEDxEuston has similarly gone viral. In addition to telling stories from the African perspective, as African youth, we must create new powerful stories to change the narrative of Africa. Our generation is already doing this, and in particular, we are doing this in the world of innovation. Over the last five years, three telling examples have been repeatedly used to represent the kind of growth and innovation happening in Africa: Ushahidi (“a tool to easily crowdsource information using multiple channels, including SMS, email, Twitter and the web”), M-PESA (“an innovative mobile transfer solution that enables customers to transfer money”) and iHub (“Open Space for technologists, investors, tech companies and hackers in Nairobi”). Tools created by Ushahidi and M-PESA have been used all around the world while iHub is used as a model for innovation hubs in Africa. While these efforts deserve commendation, the question must be asked, where will new African stories of innovation begin? Africa needs a generation of inspirational story-makers to develop a new set of diverse stories for its orators to share. Five months ago, in collaboration with the YouTube channel THNKR, we made a video about a 15-year old self-taught Sierra Leonean student who had created his own batteries, generator and FM radio station and as a result, won an International Development Initiative fellowship to world-renowned MIT in the United States. While that video garnered over 4.4 million views from people all over the world and an online fundraiser to support the initiative, more stories of young innovatorschanging their communities continue to emerge from Sierra Leone. As the World Bank and the rest of the world predict a growing African economy, what we need for Africa to grow is more makers and entrepreneurs — those who change the continent by literally making things and ideas that enable others to do the same. In March 2012, we launched a high school innovation challenge “Innovate Salone” in Sierra Leone to promote a culture of problem solving and tinkering among youth. One year later, millions of people across the globe have participated in our story of progress by viewing/sharing our videos while many have directly donated to our cause. Today, other ambitious young people are championing their own initiatives in Kenya (Innovate Kenya) and Cape Town (Innovate the Cape). Every community needs its own hackers, makers and moral compasses, and people who can share the results with integrity and perspective. Africa’s future towards sustained and equitable growth lies in the hands of its capable youth. With a little help and encouragement, we will rewrite, rebuild and share our stories of Africa. *Source CNN.David Sengeh is a doctoral student from Sierra Leone, working at MIT’s Media Lab.]]>