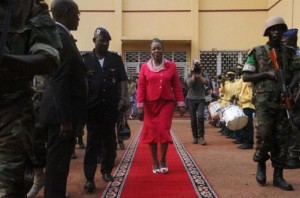 Catherine Samba-Panza is the first female leader in the country’s history [AP][/caption]The World Bank Group announced today that it will mobilize US$100 million in emergency development funds to help restore key government services and provide much-needed food, healthcare, and other vital supplies for the people of the Central Africa Republic (CAR) after violence overwhelmed their country in recent months, and displaced more than 25 percent of the population. Briefing its Executive Board, the World Bank’s Vice President for Africa said that the funds would be released in the course of 2014 and only in line with a steadily improving peace and security situation in the country. Even before the latest crisis struck, CAR had one of the world’s highest poverty rates (62%) and suffered from a long history of political volatility and upheaval. “The people of the Central African Republic are facing one of their most profound tragedies in recent memory, which requires urgent support from the international community. We are moving quickly to mobilize US$100 million to help reestablish key government services and get people the life-saving supplies they need to survive this ordeal and resume their lives. We pledge to stand shoulder to shoulder with the people of CAR in their time of need, and beyond,” says Makhtar Diop, the World Bank’s Vice President for Africa. Nearly one million people in the Central African Republic fled their homes after political and sectarian violence erupted in March 2013 following the overthrow of President Francois Bozize. More than 1,000 people have been killed in the violence and an estimated 100,000 are seeking refuge at the international airport in Bangui, the country’s capital. The U.N. has reported that 2.2 million people are in desperate need of live-saving assistance. Along with the African Union, the Economic Community of Central African States (ECCAS), and other development partners, the World Bank Group continues to monitor the security and development situation closely. The Bank will restructure its portfolio to help provide basic health services and food supplies, and mobilize additional IDA resources to re-establish essential government operations. The earliest support will speed help to the many internal refugees and other people displaced by the conflict in the capital and countryside. The Bank’s undisbursed portfolio in the Central African Republic stands at about US$200 million, delivered through the World Bank’s fund for the poorest, the International Development Association or IDA*. The Bank Group will move quickly with its partners and civil society organizations to set up emergency health services and public works programs to prevent outbreak of diseases among the many displaced and provide people with jobs and desperately-needed income. Over the coming weeks, the Bank Group will also support feeding programs to stem the devastating effects of displaced communities and the collapse of agricultural production during the crisis. As basic government activities resume, the Bank will work closely with CAR and its communities to look at how to re-establish government functions and basic services, ensure timely salary payments, and rebuild public institutions. “Staying committed to the development needs of the people and government of the Central African Republic will be essential as the country moves through this tragic chapter towards rebuilding livelihoods, communities, and revitalizing the national economy,” said Greg Binkert, the World Bank’s Country Director for the Central African Republic. In addition to its immediate emergency support, the Bank will continue to work with CAR on existing projects and programs including the US$132 million Transport-Transit Facilitation trade and road connectivity project; the US$11.7 million Emergency Urban Infrastructure project; the US$5.5 million Emergency Power Response project; and the US$3.3 million regional Central Africa Backbone project, which will build capacity and increase access to regional broadband network services for Chad, Cameroon and CAR. *The World Bank’s International Development Association (IDA), established in 1960, helps the world’s poorest countries by providing zero-interest development financing for projects and programs that boost economic growth, reduce poverty, and improve poor people’s lives. IDA is one of the largest sources of assistance for the world’s 82 poorest countries, 40 of which are in Africa. Resources from IDA bring positive change for 2.5 billion people living on less than $2 a day. Since its inception, IDA has supported activities in 108 countries. Annual commitments have increased steadily and averaged about $15 billion over the last three years, with about 50 percent of commitments going to Africa.Source World Bank/APO]]>