The entrance of Ugandan armed forces known as Uganda People’s Defence Forces (UPDF) insides the territory of South Sudan following the recent crisis has generated mixed reactions in South Sudan and Uganda. Some South Sudanese saw it as meddling into affairs of South Sudan or taking side in an internal conflict. While others saw it as a stabilising force to prevent chaos and maintain peace and order especially inside Juba city and along Juba-Nimule road, which is the lifeline to South Sudan. In Uganda, some members of parliament criticised the President for having sent the national army for a combat, rescuing or peace-keeping mission abroad without approval from the legislature, as required by the constitution. Others saw it as a dangerous move because it would make Ugandan nationals who are everywhere in South Sudan to be regarded as partisans in the conflict by the other rival, endangering their lives. Responding to this criticism, Mr Ofwono Opondo, the Ugandan government spokesman made a number of justifications in a document recently published by the New Vision, a daily newspaper affiliated to the ruling National Resistance Movement (NRM). Being in charge of Public Relations (PR) to government of Uganda, Mr Opondo gave the following explanations as justifications for the presence of UPDF in the Republic of South Sudan (RSS). 1. Under section 39 of UPDF Act 2005 the president can deploy soldiers outside the country through consultation with the speaker of the parliament. This was done pending an opportunity when Parliament convenes to be briefed and perhaps endorse. (Ugandan Parliament is currently on recess). 2. The president indeed sent a small but robust contingent of UPDF troops at the request of the legitimate government of RSS under President Salva Kiir on Dec 16th, 2013, which is allowed under the UN charter and protocol, if a friendly country asks for assistance. 3. Uganda is a member of IGAD. It Is IGAD currently chaired by Ethiopia that is leading all initiatives in full consultations with AU and UNSC. 4. Ethiopian PM who is the current chair of AU with his foreign affairs minister chairs the IGAD council of ministers. He visited Juba on Dec 19th, 2013 and held initial talks with Salva Kiir. 5. The UN secretary general, Ban Ki Moon has said publically that he had requested President Museveni to help in RSS political crisis, depending on the situation on the ground. The bloodletting that was seen in the first two days, made it clear there was a real possibility of RSS descending into real ethnic cleansing, genocide and failed state. 6. The initial mission of UPDF was twofold, first, to secure Juba International Airport, and to evacuate thousands of Ugandans estimated to be 50,000 of which 8,000 were in Juba and other foreign nationals who were either injured, trapped, scattered or hiding in the bushes. 7. Securing Juba airport has been done by UPDF and is a huge success. Securing airport meant that evacuation can and has been conducted safely by Uganda, UN and other countries who wish to evacuate their nationals. It also means that fresh humanitarian, medical supplies and assistance can be flown to those in need. It further means that the airport remains opens and safe for international and commercial flights. 8. The UPDF has also secured the 190km Juba-Nimule road corridor to enable people leave RSS and for supplies to enter Juba. Since then UPDF has put a stop to the orgy of looting, killing and bloodletting to enable the government of SS to concentrate on pacifying other parts of the country. There are no killings in those parts controlled by the government. 9. The effect of Ugandan’s positive and effective interventions enabled Rebecca Garang to leave house arrest and go to Nairobi and 2 out of the 11 arrested former government officials have been released. President Salva Kiir has accepted to cease fire and gone for negotiations which have started in Addis Ababa. 10. President Museveni warning to Riek Machar was not a threat but caution from leaders who met in Nairobi that any party which continues with war, especially against civilians unarmed combatants, would be dealt with by the region. Anybody with clear and unprejudiced mind may see a lot of sense in what the government spokesman of Uganda has explained above. I’m saying this because the current crisis has overwhelmed everybody in South Sudan because it is affecting all of us physically, economically, politically and socially. It has terribly divided many of our people politically and socially on ethnic lines. Yet the truth must be said. Some of us are academics who analyse things critically and objectively. That way, we can know the truth. What did not come out clearly in Mr Opondo’s justification is the fact that the economy of Uganda is very much intertwined with South Sudan. There are thousands of Ugandans working or doing business in South Sudan. South Sudan buys most of its goods and service such as education and health from Uganda. A perennial insecurity and instability would definitely affect Ugandan economy. As such, there is need to nip it in the bud. 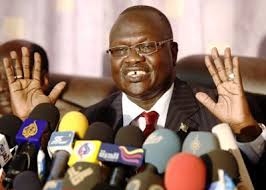 As South Sudanese, Uganda under the leadership President Museveni has stood with us during the war. Museveni was the only leader in the region who could openly challenge President Bashir of Sudan on the issues of South-North relationships of the old Sudan. During the signing of the Comprehensive Peace Agreement inside Nyayo Stadium in Nairobi on 9th January 2005, Museveni openly said that, “The people who are wearing turbans (referring to Northern Sudanese) and those people who are wearing ostrich feathers (referring to Southern Sudanese) can never be one.” No another leader of a country could have dared to say that publically because they fear the impact of such statements on the economic and diplomatic relationships between the states. Many people believe that President Museveni who had already made a lot of sacrifices in protecting the interest of the people of South Sudan can never be a threat to their collective interest. However, he may be a threat to the interest of individual Southern Sudanese who think the presence of Ugandan army is obstacle to the achievement of their goal(s). Many are aware of the fact that president Museveni may be having a vendetta with some South Sudanese politicians. For example, there is a feeling within Ugandan official circles that when Dr Riek Machar was the President of the Council of states of Southern Sudan in 1997 and beyond, he was the conduit through which military and logistical support from Khartoum used to come to the notorious Joseph Kony of Lord Resistance Army (LRA). Museveni was also a friend to Dr John Garang and the enemy of your friend is your enemy. Many believe that the current crisis is due to the failure of key institutions of governance of South Sudan. Our army (SPLA) is notoriously indiscipline and has been witnessed in Juba crisis when some members of organised forces went on killing and looting spree. Such a situation leaves no option than inviting a trusted neighbour to put things in order. Similar interventions have been witnessed in other parts of the world. The 1999 East Timorese crisis began with attacks by anti-independence militants on civilians, and expanded to general violence throughout the country, centered in the capital Dili. The violence erupted after a majority of eligible voters in the population of East Timor chose independence from Indonesia. Some 1,400 civilians were killed. Australian Prime Minister John Howard consulted United Nations Secretary General Kofi Annan and lobbied U. S. President Bill Clinton to support an Australian led intervention to enter East Timor to end the violence. As explained, the UN secretary general, Ban Ki Moon has said publically that he had requested President Museveni to help in RSS political crisis, depending on the situation on the ground. The bloodletting that was seen in the first two days, made it clear there was a real possibility of RSS descending into real ethnic cleansing, genocide and failed state. I want to end by saying that the reason for writing this article is to create a clear understanding around the debate and guess-work which has been created by the deployment of Ugandan army forces in South Sudan. It is being regarded by some as a part of problem instead of being part of solution. But to anyone with independent mind, it has something to do with our own weakness. It appears from what I read in local media in South Sudan that some of us are trying to vilify others (foreigners) for our own shortcomings. We should not jump into a bandwagon without proper understanding of what is happening or the intended outcome. The author has formerly served in the government of Lakes state of South Sudan as the County Commissioner for Yirol East and state Minister for education. He can be reached at: athiaanm@yahoo.com.Originally published in Sudan Tribune]]>