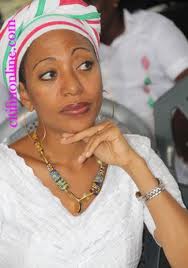 Samia Nkrumah, daughter of Ghana’s first President, Dr Kwame Nkrumah, has for the first time said publicly that she is ready to run for president on the ticket of the Convention Peoples’ Party (CPP).

The former Jomoro Legislator told XYZ Breakfast Show host Moro Awudu on Thursday that she was willing to do everything she could to resuscitate her father’s party and so will not run away from the responsibility of leading the CPP into elections when the right time comes.

Moro Awudu: Would you ever be interested in leading the CPP?

Samia Nkrumah: We’ll see, we’ll see. Once we make up our mind, we’ll announce it.

Samia Nkrumah: You rule out nothing. Nothing is impossible and nothing is ruled out. All options are opened. What we want is to maximise the chances for the CPP to perform better. Whatever we decide to do will be decided upon collectively and democratically.

Moro Awudu: When you say ‘we’, who? NEC, the party, Congress?

Samia Nkrumah: Yes, Congress and all our members. So we’re talking. All options are open.

Moro Awudu: But the question is “are you ready to take up the mantle just in case the party says ‘look Samia we think that we should also give you a try?’”

Samia Nkrumah: And why shouldn’t I be? I’ll do anything for the party. Since my return to Ghana, I came with one intention and that is to reactivate Kwame Nkrumah’s vision. What will stop me from doing my utmost to make that possible?

Until now, Samia Nkrumah had always evaded the question anytime it popped up in her interviews.