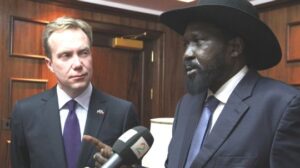 Mr Brende met South Sudanese President Salva Kiir to discuss the political and humanitarian situation in the country and Norway’s continued involvement. (Photo: Astrid Sehl, MFA)[/caption] “Over 4.4 million people in South Sudan are in need of emergency assistance. The conflict that broke out in December has made a difficult situation even worse. We are therefore doubling Norway’s funding for humanitarian assistance, from NOK 50 million to NOK 100 million,” said Minister of Foreign Affairs Børge Brende, who is in the South Sudanese capital Juba today. After armed conflict broke out between factions loyal to President Salva Kiir and former Vice President Riek Machar in mid-December, over 575 000 people have been forced to leave their homes and over 112 000 people have fled to neighbouring countries. “The agreement on cessation of hostilities that was signed last week must be respected, so that emergency assistance can reach those in need. In order to alleviate the suffering as much as possible and prevent the situation from deteriorating further, it is essential that food and medical supplies reach remote areas quickly, before the rainy season sets in and accessing these areas becomes even more difficult. This is demanding work due to the security challenges in the areas concerned and the lack of road access to key locations,” said Mr Brende. The additional funding will be allocated to Norwegian aid organisations, the Red Cross and UN humanitarian organisations that have the networks and capacity needed to reach the hard-hit South Sudanese population. Norway has so far provided an additional NOK 8 million in assistance through the UN Central Emergency Response Fund (CERF). Having received only half of the funds that are needed to meet the acute humanitarian needs in the country, the UN will probably call for more support from the international community in the time ahead. Norway is following developments closely and will consider making further humanitarian contributions. Today, Mr Brende met South Sudanese President Salva Kiir to discuss the political and humanitarian situation in the country and Norway’s continued involvement. Norway also strongly supports South Sudan through its cooperation with the US and the UK in the Sudan Troika. Mr Brende met representatives of the Intergovernmental Authority on Development (IGAD), the other Troika members, the EU and China. He also met UN Special Representative for South Sudan Hilde Frafjord Johnson, the leaders of UN organisations, representatives of Norwegian aid organisations, and Norwegian military officers and civilian police officers engaged in the UN peace mission UNMISS and UN Police (UNPOL). *Source Norway Ministry of Foreign Affairs/APO  ]]>