AU commission chairman Nkosazana Dlamini-Zuma could be heading back home after accepting nomination to represent the ANC in parliament.   [caption id="attachment_8210" align="alignleft" width="300"] 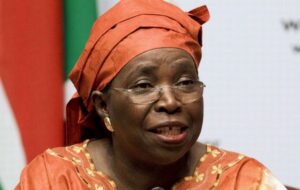 AU commission chairman Nkosazana Dlamini-Zuma could be heading back home after accepting nomination to represent the ANC in parliament. File photo
Image by: Business Day / Getty Images[/caption] She resigned from President Jacob Zuma’s cabinet in 2012, in which she served as home affairs minister, after she took up the AU position . Her name is high on the ANC list, as is that of ANC chairman Baleka Mbete. Dlamini-Zuma’s acceptance could mean she is ready to return home before her term of office at the AU expires in 2016. Mbete was tipped to become deputy president of the country in 2009 but was forced to resign when Kgalema Motlanthe accepted the position a few minutes before the first sitting of parliament. Mbete served as deputy president of the country following the recall of former president Thabo Mbeki in 2008. Top of the ANC list for parliament is Zuma with 5175 votes, followed by Cyril Ramaphosa with 4322 votes. Ramaphosa is expected to replace Motlanthe in government after the polls. Public Enterprises Minister Malusi Gigaba is third, followed by Home Affairs Minister Naledi Pandor, Justice Minister Jeff Radebe and Sport Minister Fikile Mbalula. *Source Times Live      ]]>